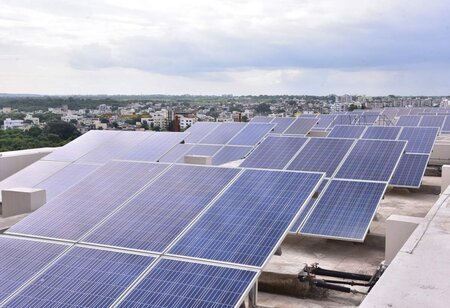 ReNew Power announced plans to develop a solar cell and module manufacturing facility with a capacity of 2 gigawatts per year in Gujarat's Dholera Special Industrial Region on Monday. The facility would produce solar cells and modules using cutting-edge monocrystalline PERC (Passivated Emitter and Rear Contact) and big wafer technology, as well as Industry 4.0 manufacturing best practices, according to a release.

The project has been assigned 100 acres of land by the Gujarat government, ensuring adequate availability of land for future capacity expansion. The plant is likely to be vertically integrated in terms of processes and infrastructure for the manufacturing of solar cells and modules and is anticipated to commence operations from fiscal year 2022-23.

The manufacturing capacity being build would incorporate ReNew Power's sustainability initiatives and ensure decarbonisation of manufacturing processes and supply chain to create a 'Green Factory' of the future, it added. "The government's Production-Linked Incentive (PLI) scheme for solar photovoltaic (PV) modules has opened up several avenues. ReNew plans to manufacture both solar cells and modules in the Dholera manufacturing facility with the goal of creating a globally competitive manufacturing unit.”

"The new facility will help the company to bring a crucial function in-house," Founder, Chairman and CEO of ReNew Power, Sumant Sinha said.

Gujarat has been one of the forerunners in promoting renewable energy and ReNew's first power project, a 25.2 MW wind farm, was also commissioned in Jasdan, Gujarat. The manufacturing plant is likely to generate 2,500 jobs in the state, it stated.

Further Chief Secretary to Chief Minister of Gujarat and Chairman of Dholera Industrial City Development Ltd, M K Das stated, "This manufacturing facility will not only help reduce import dependency of the solar sector but will also play an important role in fulfilling the Honourable Prime Minister's vision of an Aatmanirbhar Bharat (self-reliant India)."

Native manufacturing of modules and cells is likely to support renewable energy companies reduce their dependence on imported components and finished modules from China, which presently accounts for nearly 80 per cent of the world's solar module production. This would also aid ReNew avoid paying high customs duties on imported components, which are expected to come into force from April 2022, the company added.

In addition, the PLI scheme proclaimed by the Centre in 2020 would also offer financial incentives to domestic manufacturing units and is expected to support add 10,000 megawatts of integrated solar PV manufacturing capacity in the country.

The Dholera manufacturing facility, apart from supplying to ReNew Power's own utility-scale power generation business, would also sell components to other renewable energy firms in India, it added.