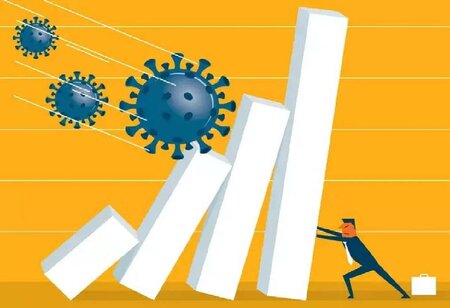 India’s economy exhibited more indications of cooling in May, although the weakness is already beginning to dissipate of late as the nation escapes lockdowns enforced to check the pandemic’s spread.

A slew of data from services activity to automobile sales pointed to lack of demand last month, which in turn kept the needle on an overall activity indicator unchanged at 6. The relatively strong score is because the gauge uses the three-month weighted average rates to smooth out volatility in the single-month readings.

With the second Covid-19 wave now receding, the economy is already beginning to stir back to life. A basket of high-frequency, alternative and market indicators such as retail activity and road congestion pointed to a pickup in the week to June 13, Abhishek Gupta, India economist at Bloomberg Economics, said in a report.

Here’s more India data worth tracking in the days ahead:

Activity in India’s dominant services sector contracted for the first time in eight months in May. The IHS Markit India Services Purchasing Managers’ Index slid to 46.4 last month from 54 in April, falling below the 50 level that divides contraction from expansion. Services sector accounts for more than half of the nation’s gross domestic product.

A similar survey earlier showed activity in the manufacturing sector losing momentum all of which dragged the composite index to 48.1 in May from 55.4 the previous month.

Exports growth picked up at 69.4% year-on-year in May, aided by a favorable base and robust global demand. The performance was strong even sequentially, helped by shipments of petroleum products, engineering goods and chemicals. On the other hand, momentum for imports tapered, contracting from a month earlier, primarily on account of a sequential drop in demand for oil and gold.

Retail auto sales -- a bellwether of consumer demand -- fell by more than half in May from the previous month as local lockdowns kept dealerships shut. That together with falling consumer confidence and increasing job losses weighed on discretionary purchases.

Bank credit grew 6% in May from a year earlier, picking up from 5.7% expansion seen in end-April, central bank data showed. Liquidity conditions stayed comfortable, with the banking system in surplus.

Industrial production expanded, jumping 134.4% in April from a year earlier, mainly because of a favorable base effect -- with activity last year coming to a halt owing to a nationwide lockdown to control the pandemic’s spread.

Similarly, output at infrastructure industries, which makes up 40% of the industrial production index, expanded 56.1% in April from a year ago. Both data are published with a one-month lag.