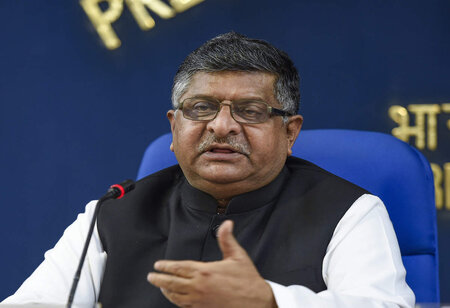 “The core component of this scheme is to offset the huge import of telecom equipment worth more than Rs 50,000 crore and reinforce it with ‘Made in India’ products, both for domestic markets and exports,” the telecom ministry said in a release. Currently, India imports over 80 per cent of its telecom and wireless networking equipment.

With the inclusion of telecom equipment manufacturing under the ambit of PLI schemes, the total number of sectors under such programmes stands at 13. All the sectors included under the various PLI schemes are mostly labour intensive and aim to attract global manufacturing giants into the Indian manufacturing space.

Trade experts are of the opinion that all the sectors chosen under PLI schemes are also a part of the government’s plan to present India as an alternative destination to China for setting up manufacturing hubs.

In September last year, Prime Minister Narendra Modi had, at the US-India Strategic Partnership Forum, pitched India as an alternative manufacturing destination and said the decision on developing global supply chains would not be based just on costs.

“Companies are also looking for reliability and policy stability. They should also be based on trust along with affordability. India has all of these qualities,” he had said.

In April last year, the central government had for the first time notified the PLI scheme for mobile phones and allied component manufacturing. As a part of the scheme, companies which set up new mobile and specified equipment manufacturing units or expanded their present units would get incentives of 4 to 6 per cent, with the total outlay on the scheme amounting to Rs 41,000 crore.

In November, the PLI scheme was expanded to include 12 more sectors such as automobile and automobile components, pharmaceutical drugs, textile products, food products, high efficiency solar photo-voltaic modules, white goods such as air conditioners and LED bulbs, and speciality steel products. Finance Minister Nirmala Sitharaman had in her Budget for 2021-22 said the total outlay on PLI schemes in these 13 sectors over the next five years would be Rs 1.97 lakh crore.

Like the other PLI schemes, the incentives for companies in the telecom and networking equipment manufacturing space would be on achievement of a minimum threshold of cumulative incremental investment and incremental sales of manufactured goods net of taxes.

Eligible Micro, Small and Medium Enterprises (MSMEs) will get an incentive of 7 per cent for the first and the second year, followed by an incentive of 6, 5, and 4 per cent in the third, fourth and fifth year, respectively.

The minimum investment threshold for MSMEs has been kept at Rs 10 crore, while for other companies it has been kept at Rs 100 crore. The scheme, which will be operational from April 1, will run over the next five years with a total outlay of Rs 12,195 crore for providing these incentives.

“In the coming five years, we hope to have incremental production of Rs 2.44 lakh crore and export worth Rs 1.95 lakh crore (from this scheme). Direct and indirect employment would be provided to nearly 40,000 people, while tax revenues of up to Rs 17,000 would be generated,” Telecom Minister Ravi Shankar Prasad said, adding that another PLI scheme for laptops, iPads and other consumer goods would also be launched soon.