How FDI can Benefit the Recipient Nation in Economic Growth? 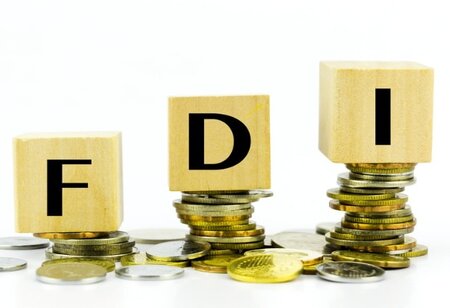 FDI refers to the investment of funds by an organisation situated in one country into another company of some other country, with the commitment of beginning a ‘lasting interest’. When an organisation acquires a minimum of 10% of voting power in another organisation it is called lasting interest. However, FDI is not restricted only to international movement of capital but also defines the movement of elements like skills, management, processes, technology, and so on, which are complementary to capital. Playing an advantageous role, FDI benefits the host country in many ways. There are some advantageous impacts of foreign direct investment on the economic growth in terms of employment, economic growth, human resource development, development of finance and technology, improved capital flow, and so on. If we take a look at the role of FDI in the growth of India, FDI has proven to be an efficacious strategy as at the time of pandemic, the FDI influx has enhanced around 19%, compared to last year. According to some recent data issued by the Ministry of Commerce, India made a record of $81.72 billion in FDI in the fiscal year 2020-21, taking a high jump from $74.39 billion in 2019-20.

There are many ways in which FDI benefits the recipient nation and some of them are mentioned below:

Job Creation is one of the most apparent advantages of FDI and is also one of the most important reasons why a developing nation should attract FDI. Since enhanced FDI boosts the manufacturing as well as the services sector, it creates job opportunities, and helps in reducing unemployment among the educated youth by emphasizing on skilled labour in the country. Improved employment can lead to augmented incomes, and advances the economy of the country.

FDI also impacts positively on human resources development. Emphasizing the knowledge and capability of the workforce, Human Resources is about gaining skills. Through this acquired expertise, the education and human capital quotient of the country can be boosted. Since human capital is mobile, it can lead to the creation of a ripple effect and therefore train the human resources in other companies.

One of the most crucial advantages of FDI for a developing country, is that it permits the renovation of regressive areas in a country into industrial and business centres. This can also result in boosting the social economy of the area and as the Hyundai unit situated at Sriperumbudur, Tamil Nadu is one of the greatest examples of this process.

Due to accessing the latest funding tools, advanced technologies and operative practices from across the world, recipient businesses expand intrinsically. With time happens the introduction of novel and improved technologies resulting in heightened proficiency and efficiency of business as well as the industry.

Since all the goods produced through FDI are not supposed to go for domestic consumption, most of these products will be presented in global markets as well. By fashioning 100% Export Oriented Units and Economic Zones have FDI investors can improve their exports from other countries. Apart from that, the continuous movement of FDI into a country leads to the unperturbed flow of foreign exchange which ultimately assists the country in maintaining a contented reserve of foreign exchange.