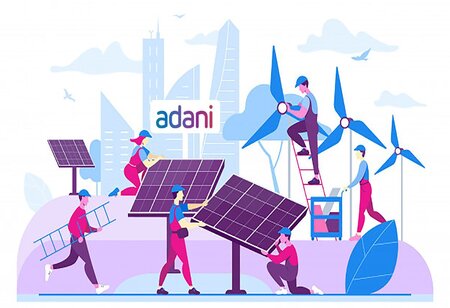 Adani Green Energy Ltd (AGEL) is in talks to buy SoftBank Group Corp.'s majority stake in solar power producer SB Energy, says two persons familiar with the situation. This comes after SoftBank's intention to sell its full 80 percent share in SB Energy to Canada Pension Plan Investment Board (CPPIB) for $525 million fell through. According to the people indicated above, Adani Green has initiated due diligence on SB Energy. On Sunday, Mint broke the story online.

SB Energy has a portfolio of 7.7 gigawatts (GW) in India. Bharti Enterprises Ltd owns the remaining 20% stake in the company. Bank of America and Barclays were handling the sale process. France’s Total has invested $2.5 billion for acquiring a 50% stake in 2.35GW operating solar assets of AGEL and a 20% stake in AGEL. With 3.47GW operational capacity and 15.24GW portfolio, the Adani-Total JV plans to commission 25GW by 2025.

Queries emailed to spokespersons for Adani Group and Total; Raman Nanda, SB Energy’s chief executive; and Rohit Modi, SB Energy’s country head and president-India, on Saturday remained unanswered. There has been sustained interest in India’s green economy despite the turmoil caused by the pandemic. India is running the world’s largest clean energy programme to achieve 175GW of renewable capacity, including 100GW of solar power by 2022.

According to the Central Electricity Authority - India’s apex power sector planning body, the country will require 280GW from solar projects by 2030 to meet its power requirement of 817GW by then.

The diversified Adani Group has been on an acquisition spree to grow its green energy portfolio. It recently bought Sterling and Wilson Pvt. Ltd’s 75 megawatts (MW) operating solar projects and Toronto-based SkyPower Global’s 50MW solar project in Telangana. Adani Enterprises Ltd has also partnered EdgeConneX to develop 1GW of data centre capacity over the next decade that will be powered by renewable energy. The valuation of SB Energy in the proposed deal with CPPIB was lower than the one expected by the renewable energy industry. SoftBank invested more than $800 million in the business in the past five years. The stake sale efforts followed SB Energy dropping its plan in July 2020 to raise $600 million through a dollar bond.

SoftBank’s planned deal with CPPIB was in the works for around a year, with CPPIB placing several pre-conditions for SoftBank before finalizing the transaction.