Reserve Bank of India (RBI) has Signaled a Return to Normalcy 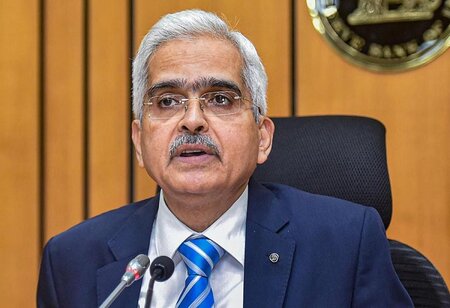 It may have been a minor shift in tone from RBI last Friday, but it is unquestionably the most meaningful in recent memory. The statement said very little, but it was clear from reading between the lines that it signaled a shift in strategy. Governor Shaktikanta Das has taken the second step toward normalization by electing to drain some surplus liquidity; the first being the central bank's tolerance for higher returns at government paper auctions in July. The calculated action—doubling the amount to be pulled out to Rs 4 lakh crore—cannot be blamed, and it is likely required, considering that the RBI's inflation projection has been raised to 5.7 percent. That's a good 20-30 basis points over consensus, and it's also a smart strategy because it leaves the Monetary Policy Committee (MPC) with less room for error.

The bond markets now have no reason to quibble. The central bank has given them a heads up, telling them clearly it intends to start soaking up liquidity soon; the excess liquidity is already an unseemly Rs 8 lakh crore.

The upshot of the central bank’s actions was a slight spike in bond yields; experts now believe we are looking at close to 6.4-6.5% on the benchmark by the end of the year; short-term paper too is expected to become a little more expensive. The government, as the biggest borrower, will of course need to pay more; in FY21, it managed to borrow a record amount at the lowest of rates. So far in FY22, the Centre has been parsimonious, probably aware borrowing costs could go up. Given corporate paper is priced off the risk-free yields of gilts, one should expect money to become a little more expensive—though by how much, one is not sure, given bankers’ claims that there is little appetite for corporate credit.

The central bank, however, deserves full credit for the manner in which it has signalled the change. Deputy governor Michael Patra’s explanation for why policy was not being tightened even though inflation has been well above the MPC’s comfort zone might not pass academic muster, but there is no denying these are difficult times and, therefore, RBI could be cut some slack.

Patra’s point, that the central bank is focusing on average inflation and that the glide path would see it move from 6.2% in FY21 to 5.7% in the current year and thereafter to 4%, is well taken. While the latest round of the survey of households’ expectations of median inflation for the three-month and one-year ahead periods showed a hardening by 50 basis points and 60 basis points, respectively, between May and July, these surveys have often been out of sync with reality. However, there are those that argue the central bank’s mandate is primarily to manage inflation rather than support growth; indeed, they point out that the central bank can’t really do much to spur aggregate demand which requires fiscal stimulus. Consequently, the loose monetary policy is not warranted. That may be so, but at a time when the Centre is reluctant to loosen its purse strings, and there is every chance a third wave is on its way, it helps if interest rates remain at affordable levels for as long as this is possible. For all the transmission of the cut in the repo rates, the fact is the banks are lending only to the very best and not those who really need the money.