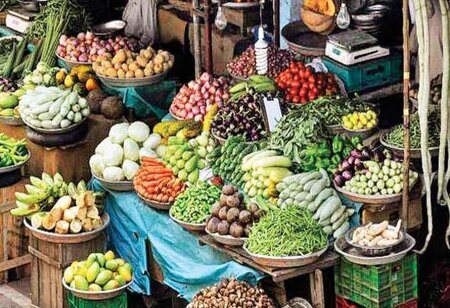 Retail inflation based on Consumer Price Index (Combined) came to a three-month low of 5.59 per cent in the month of July due to the moderation in food prices, according to data released Thursday by the National Statistical Office (NSO).

The inflation print has come within the RBI’s targeted range of 2 plus/minus 4 per cent after two months, easing concerns of an immediate rate hike action by the central bank.
Industrial output rose by 13.6 per cent in June as against a 16.6 per cent contraction in June 2020, indicating a waning of the low base effect of last year, according to a separate set of data released by the NSO. Industrial activity was affected due to the nationwide Covid lockdown last year in April and May but had picked up June onwards.

In its August policy meeting, the RBI maintained status quo on rate but stated that high frequency indicators suggest softening of price pressures in edible oils and pulses in July in response to supply interventions by the Government. While input prices are rising across manufacturing and services sectors, weak demand and cost cutting are tempering the pass-through to output prices, it said.

The RBI has projected the CPI inflation at 5.7 per cent during 2021-22 — 5.9 per cent in the second quarter, 5.3 in the third and 5.8 in the fourth, with risks broadly balanced. CPI inflation for Q1 in 2022-23 is projected at 5.1 per cent. “…with inflation expected to remain sticky in the 5-6% range over the next three quarters, it’s increasingly difficult to characterise the pressures as purely transitory in nature. A small disruption could push inflation back above the 6% threshold, which implies that some uneasiness will continue about how soon the MPC may embark on policy normalisation,” Aditi Nayar, Chief Economist, ICRA Ltd, said.

“We anticipate that the MPC will embark on policy normalisation once domestic demand strengthens and starts dominating inflationary pressures, in place of supply-side issues. We foresee a change in the stance to neutral from accommodative in the February 2022 policy review, followed by a hike in the repo rate of 25 bps each in the April 2022 and June 2022 reviews,” Nayar said.
Among sectors for industrial output, manufacturing, which comprises 77.63 per cent of IIP, rose by 13 per cent in June after an increase of 34.5 per cent in May. Mining output increased by 23.1 per cent and power generation increased by 8.3 per cent in June.

Industrial output is picking pace but continues to remain below pre-pandemic levels. “The index at 122.6 for IIP was lower than that in 2019 when it was 129.3. For manufacturing it was 129 and has come down to 121. Clearly there is a long way to go for the IIP,” Madan Sabnavis, Chief Economist, CARE Ratings, said.