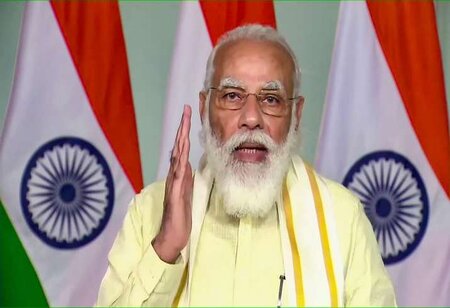 Exhorting states to focus on exports and self-reliance, Prime Minister Narendra Modi on Saturday said commodities such as edible oils that India has been importing in large quantities can be locally produced, and the gains of that will accrue to Indian farmers.

Addressing the 6th meeting of the Governing Council of NITI Aayog, he said, “Our agriculture sector is full of opportunities but still there are some truths we need to accept. We may be called a krishi pradhan desh but despite that, we import edible oil worth Rs 65,000-70,000 crore. We can stop this, this money can go to our farmers. Our farmer is the claimant of this money. Our farmers can produce many such products, not only for our country but also supply to the world,” he said.

With Cabinet colleagues and chief ministers of most states joining him via video conference, the Prime Minister urged states to prepare agro climatic regional planning strategies to help farmers, and create conditions for boosting exports at the district level. For the farm sector, it was important to build storage or processing capacities, which needed investment. “Our farmers need the necessary economic support, better infrastructure, modern technology, for which reforms are very important,” he said.

The government is also working on mission mode to provide clean water through piped supplies, while the BharatNet scheme is helping in big transformation in rural areas

In his 20-minute address, the Prime Minister also highlighted the government’s schemes and initiatives towards promoting self-reliance across sectors. He asked states to take advantage of the Production Linked Incentive (PLI) scheme to attract maximum possible investments. He told the states that the private sector was coming forward for development of the country in an encouraging way. “This is helping the movement towards the goal of Atmanirbhar Bharat,” he said.

To boost exports, for instance, Modi argued that coastal states can tap into the ‘blue economy’ and value add by exporting processed fish, which has a high global demand. He also stressed the need to need to strengthen MSMEs and startups and urged state governments to shortlist local products in various districts that can be promoted.

Pointing out that the recent Budget has created a positive momentum towards growth, Modi said the spending on infrastructure sector will help the economy at many levels in creating a multiplier effect and boosting employment opportunities. “Since states present their Budgets a few weeks after the Union government, they can synchronise their spending taking cues from the Union Budget,” Modi said. Arguing that the Centre had recently eliminated more than 1,500 laws to minimise policy intervention, he argued that states should also reduce compliance burden for our citizens for Ease of Living.

Modi said there is a need for competitive, cooperative federalism not only among states but also districts so that development remains a prime theme. He said the agenda points for today’s discussions were shortlisted keeping in top priorities of the country in mind. The agenda of the meeting includes deliberations on agriculture, infrastructure, manufacturing, human resource development, service delivery at grassroots level, and health and nutrition.

“In the Covid period, we saw how the Centre and states came together to work, the nation succeeded and a good image of India was built before the entire world. Friends, today, as we complete 75 years of independence, this governing council meet becomes even more significant,” he said. Speaking at a press conference after the day-long meeting, NITI Aayog Vice Chairman Rajiv Kumar said the Prime Minister urged the need to create district export promotion councils to promote exports.

The welfare measures taken by the government has led to improvement in the lives of poor people. In the past few years, opening of bank accounts, increase in vaccination and health facilities, free electricity connection, free gas connection to empower the poor has reflected a phenomenal change in their lives, he said. Post 2014, more than 2.4 crore houses have been built in villages and cities. “The government is also working on mission mode to provide clean water through piped supplies, while the BharatNet scheme is helping in big transformation in rural areas,” he said.