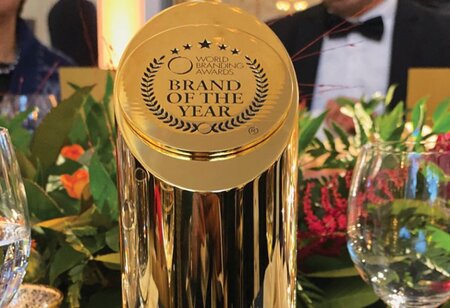 The highly prestigious World Branding Awards – the ultimate global brand recognition accolade, now in its 12th edition, saw over 400 brands from 45 countries named “Brand of the Year” after a vigorous voting and nomination process which took place between February and July of this year, and over 250,000 consumer participants across the globe despite difficulties posed by the COVID-19 pandemic. Now in its seventh year, the Awards are organised by the World Branding Forum, a global non-profit organisation dedicated to advancing the standards of the branding industry. The 12th edition of the Awards is set to take place in March 2021 at Kensington Palace in London, the home of the Awards since 2015.

Amongst the top tier brands listed as Global Tier winners are CoCo, Faber Castell, Fender, Heinz, IKEA, LEGO, McCain, Netflix, PILOT, Spotify, Yakult, and Yamaha, amongst others. Regional Tier winners include Anchor (New Zealand), Cotton On (Australia) Elkjøp (Norway), LuLu (United Arab Emirates), Isetan and Uniqlo (Japan), amongst others. Winners are uniquely judged through three streams: brand valuation, consumer market research, and public online voting. Seventy percent of the scoring process comes from consumer votes. There can only be one winner in each category per country. The Awards have seen a steady increase in voter participation every year since its inception. Many participating countries were added to the list this year including Ireland and New Zealand.

The Forum also organises and sponsors a range of educational programmes, as well as publishes branding news on its website that reaches a global audience of over 35 million visitors annually

“This year has been an extremely difficult time for businesses worldwide. COVID-19 has forced many brands to adapt to a new normal, and the World Branding Awards celebrates the efforts these businesses have put into their branding and marketing. The excitement is building for the 2020-2021 World Branding Awards,” said Richard Rowles, Chairman of the Forum. The Forum also organises and sponsors a range of educational programmes, as well as publishes branding news on its website that reaches a global audience of over 35 million visitors annually