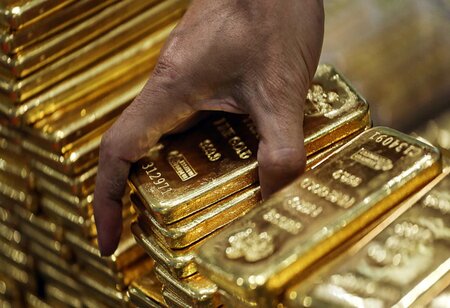 India's gold imports for May jumped 677 per cent in one year and this is the highest surge seen on a yearly basis, as correction in prices just before Akshaya Tritiya, a key festival for Hindus and Jains celebrated in the first week of the month, as well as the wedding season boosted retail jewellery purchases.

According to a Reuters report citing government sources, higher imports by the world's second-biggest bullion consumer, India, could support benchmark gold prices, but the surge could increase India's trade deficit and put pressure on ailing rupee.

A dealer told Reuters that the gold imports in June could fall further below 60 tonnes as the demand has started to falter due to the recent rebound in prices.

India imported 101 tonnes of gold in May compared to 13 tonnes a year earlier, as per the report. In terms of value, May imports surged to $5.83 billion from $678 million a year ago, he said.

"Retail consumers were waiting for price correction. As prices corrected during Akshaya Tritiya festival, they rushed to jewellery shops," Harshad Ajmera, the proprietor of JJ Gold House, a wholesaler in the eastern Indian city of Kolkata, was quoted as saying by Reuters.

However, local gold futures fell to ₹49,572 per 10 grams in May, the lowest in nearly three months. In Delhi and Mumbai, 22-karat gold today retails for ₹47,850 per 10 grams, slightly varying depending on store-to-store prices.

Buying gold is considered auspicious during festivals like Akshaya Tritiya and Dhanteras, as well as weddings.

Demand for gold improved last month because of the wedding season, which saw a lot of weddings that were postponed from the last year due to pandemic restrictions, said a Mumbai-based dealer with a private bullion importing bank.

According to traditional customs, gold is an essential part of the Indian bride's dowry. It is also a popular gift from family and guests at weddings.