How To Present Yourself in Business Meetings 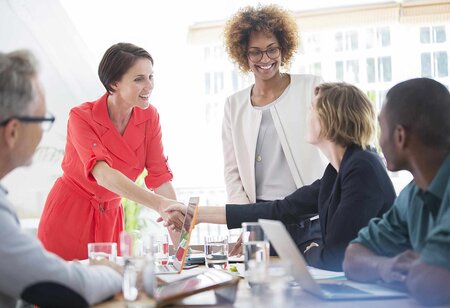 Making the first impression can be crucial in starting an efficacious business relationship or concluding a successful project via meeting. Therefore, it is extremely important to introduce yourself properly and professionally in business meeting. Although it is quite easy to make an unimpressive first impression on someone, even if without knowing, it’s much difficult to make a good positive impression on someone. To introduce yourself professionally & casually, you must put some effort into your introductions as it will give others an idea about your personality.

To introduce yourself professionally and present yourself impeccably during a meeting, the below-mentioned facts can be helpful.

The style of presenting and introducing yourself in corporate meetings often give others the first impression of yours. According to a survey, most people start forming an opinion about you within the first 3 seconds of conversing with you and sometimes these decisions can be difficult to amend later. While introducing ourselves to someone, our major intention lies in establishing some sort of constant relationship for shared benefit. To make good first impression some of the crucial factor lies in firm handshake, proper introduction, and starting a swift conversation.

The gesture of shaking hands with someone says a lot about your personality. In corporate culture, it is more preferrable to go for a handshake when being introduced to someone or while saying goodbye, meeting someone after a long time, meeting the participants in a meeting, and concluding a business deal. Some of the most common features to emphasize while handshaking includes maintaining a standing posture, leaning forward, making eye contact, smile, firm shake, greeting the other person by referring their name, and so on.

Your introduction should let other people know about your personality and inspire people to involve in a conversation with you. By making others feel confident you will put them at ease and it will generally ensure a smooth conversation. When introducing yourself, highlight your role or title, your business, industry we are operating and so on. Make sure that introduction is not lengthy and should combine certain elements, such as your business and your benefit statement to give others a brief idea about your professional career.

Speaking clearly and with a smile, make sure to maintain eye contact with the person you're conversing with. Try not to create an unnecessary tension within the atmosphere and if possible, use a bit of humour to put others at ease.