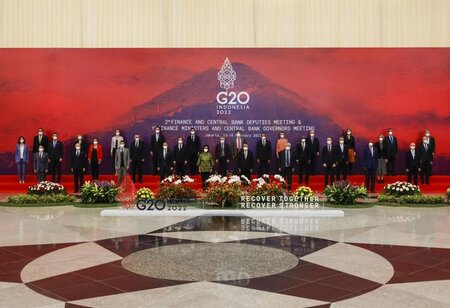 Countries must avoid tensions and cooperate to support a recovery from the pandemic as it lingers in many parts of the world, Indonesian President Joko Widodo has told at a gathering of top financial leaders of the world's largest economies Thursday.

“The winter is coming," Widodo said in welcoming finance ministers and heads of central banks of the Group of 20 industrial nations.

“The pandemic is far from over, and the global economy is struggling," he said. “During this situation, no single country could recover alone. All countries are interconnected, no one is isolated."

The G-20 financial gathering comes as many economies are treading a precarious path between raising costs of borrowing to cool inflation and helping to support recoveries from the pandemic.

Worries over potential conflict in Ukraine are an added unwelcome source of uncertainty, Widodo said, warning against antagonisms at this time.

“It is not the time to create new tensions that could affect global recovery, let alone jeopardize the world peace as we’ve currently seen in Ukraine," he said. “It is necessary that every party puts an end to rivalry and frictions."

Officials were attending the meetings both in person and online, given troubles with travel and quarantines due to outbreaks, mostly of the omicron variant of coronavirus, that are plaguing many countries.

Host Indonesia is among many countries in Southeast Asia that have endured severe waves of infections, though vaccinations have helped quell the worst of outbreaks.

The fourth most populous nation with 274 million people, it has reported nearly 5 million cases and 145,622 deaths. In the past month, 690,518 new cases have been reported.

Speaking at a seminar on fortifying global health systems, U.S. Treasury Secretary Janet Yellen noted that public health is vital to economic growth. She urged that countries step up in providing the $75 billion needed over the next five years to fill gaps in financing for better health care.