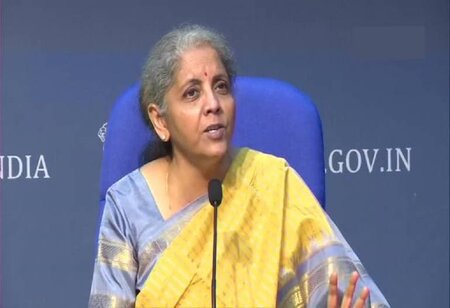 Family pensions of deceased bank employees will more than treble from now on, with Finance Minister Nirmala Sitharaman removing its cap in favour of a uniform 30 per cent slab to be calculated on the last salary drawn by the employee.

With this, the family pension rises from a maximum of Rs 9,284 per month to as high as Rs 35,000, depending on the last drawn pension amount. Debasish Panda, secretary, Department of Financial Services, announced this on Wednesday in the presence of the FM. He also announced an increase in pension contributions by banks under the National Pension System (NPS).

Panda said the pension hikes are in continuation of the 11th bipartite settlement on wages, which was signed by the IBA and bank unions on November 11, 2020.
“There was a proposal in it for enhancement of the family pension and also the employer’s contribution under the NPS. This has been approved by the FM and the benefits would now accrue to the family pensioner,” Panda said.

Earlier, the family pension scheme had slabs of 15-20 and 30 per cent of the pay that the pensioner drew at that point of time and it was capped at a maximum of Rs 9,284. “That was a very paltry sum and the FM was very concerned… she wanted it to be revised so that they get a decent amount to survive and sustain,” Panda said, adding that with this, the pension can go to as high as Rs 30-35,000 per family.

IBA officials were not immediately available for comments. C H Venkatachalam, general secretary of All India Bank Employee Association, said the schemes were agreed upon already and the bank employees were awaiting the announcement. A defined contributory pension fund governs employees who joined banks after April 2010. This scheme will benefit 60 per cent of public sector employees, Venkatachalam said.

On account of increase in pension contributions by banks under the new pension scheme, Punjab National Bank would incur Rs 10-12 crore per month, a bank official said. For the increase in family pensions of deceased bank employees, the im¬p¬act would be marginal for PNB as such pensioners are less, he added.