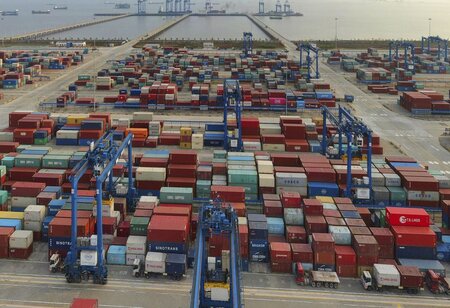 India’s merchandise exports hit 7.71 billion US dollars in the first week of June, raising expectations that they will remain buoyant for the fourth month in a row.

Exports have remained above $30 billion for three consecutive months starting March, when shipments hit a record $34.45 billion. Early recovery in the US and Europe due to the decline in Covid cases overseas and faster vaccination is fuelling demand for Indian goods. Exports are expected to support growth in FY22 by providing a cushion against the sharp correction in domestic demand due to cautious consumer sentiment on the back of rising health costs.

Tentative data for the first week of June released by the commerce ministry on Wednesday showed exports grew 52.4% to $7.71 billion, while imports rose 82.91% to $9.1 billion. Non-petroleum exports increased by 49.35% while non-petroleum imports rose 72.8% during the same period.

The Reserve Bank of India (RBI) last week urged the government to provide enhanced and targeted policy support for exports, taking advantage of the rising external demand for Indian goods. “India’s exports in March, April and May 2021 have launched into an upswing... The need of the hour is for enhanced and targeted policy support for exports. It is opportune now to give further policy push by focusing on quality and scalability,” RBI said.