Adani, Tata Power, and 13 other Companies to Receive Incentives Under the Production-Linked Scheme 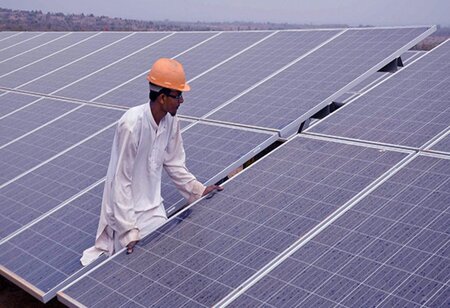 As the scope of the scheme expands, as many as 15 firms, including public-sector Coal India, Adani Infrastructure, Larsen and Toubro, ReNew Solar, Tata Power Solar, Waaree Energies, Vikram Solar, Megha Engineering & Infrastructures, and FS India Solar Ventures, are expected to receive incentives under the production-linked incentive scheme for solar manufacturing.

The department of promotion of industrial trade (DPIIT) is said to have backed the recommendation of the ministry of new and renewable energy (MNRE) to increase the scheme's funding to Rs 19,500 crore, up from Rs 4,500 crore granted initially, during a recent inter-ministerial meeting.

According to reports, the meeting, which was chaired by NITI Aayog CEO Amitabh Kant and attended by DPIIT secretary Anurag Jain and MNRE secretary Indu Shekhar Chaturvedi, was called to consider how to use up to Rs 30,984 crore in savings from auto and auto component PLI programs. The government lowered the budget for the auto industry PLI scheme from Rs 57,043 crore to Rs 26,058 crore.

Both MNRE and the ministry of electronics and information technology (MeitY) had sought additional funding for the PLI schemes under their respective ministries, over and above their initial outlays.

As per the minutes of the meeting, reviewed by FE, Kant mentioned that “considering the fact that these (solar) proposals are already in hand and can be implemented straight away there is a convincing reason to allocate an additional amount of Rs 19,500 crore to MNRE for the implementation of the PLI on high-efficiency solar module”. Import dependency of the segment, the context of Glasgow commitments, and the requirement of domestic solar manufacturing for meeting green hydrogen targets were also taken into consideration while making the recommendation for additional fund allocation.

Reliance New Energy Solar, Andhra Pradesh-based transformer manufacturer Shirdi Sai Electricals, BC Jindal Group’s Jindal India Solar Energy were selected as the beneficiaries of the PLI scheme for solar panel manufacturing based on the initial allocation of Rs 4,500 crore. These firms will cumulatively set up around 12,000 megawatts (MW) of manufacturing capacities under the scheme. Nevertheless, MNRE pointed out that it had received 18 eligible PLI bids in total, and the manufacturing commitment can go up to 54,809 MW if the PLI allocation goes up to Rs 24,000 crore to accommodate all bidders.

The new capacities are seen to offer a domestic supply source to an industry that is 80% dependent on imports. As per the recent COP26 announcements, the country has set a target to install 500 gigawatts (GW) of renewable energy capacity by 2030 and much of it is to come from solar plants. The current installed renewable energy capacity in the country is 103 GW, of which 48 GW are solar.

Another 50 GW of renewable energy projects are under implementation and 32 GW are in various stages of bidding. To enhance domestic manufacturing, the Centre had imposed a 25% safeguard duty on solar imports from China and Malaysia in July 2018 for two years, which was extended to July 2021, at a rate of 15%. From the beginning of FY23, solar module and cell imports will attract a basic customs duty of 40% and 25%, respectively.

The Cabinet had cleared the scheme on March 31. The Indian Renewable Energy Development Agency, on May 25, had invited applications from solar module manufacturers for availing the PLI scheme, and the financial bids were opened on October 25. The beneficiaries of the solar PLI scheme have been selected through competitive bidding and ranked based on manufacturing capacity proposed to be set up by companies and the extent of elementary products required for manufacturing solar panels they promise to make in the country.