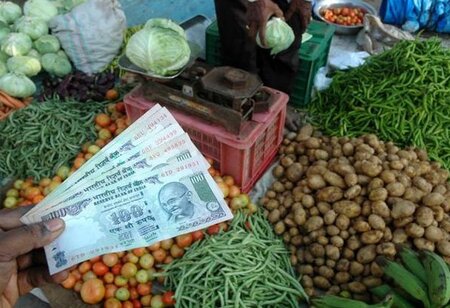 India’s wholesale price inflation eased in June to 12.07 percent from a record 12.94% a month ago as food and fuel prices fell while those of manufactured items accelerated.

Data released by the industry department showed food inflation in June decelerated to 3.1% from 4.3% a month ago while fuel inflation eased to 32.8% from 37.6% despite the recent increase in prices of petrol, diesel and cooking gas.

Manufactured products saw a marginal increase in inflation to 10.9% from 10.8% in May due to rising price pressure in textiles, apparel, leather, wood, chemicals, pharmaceuticals, cement, basic metals and fabricated metal products. Core inflation excluding food and fuel items hardened further to 10.4% in June from 10% a month ago.

The wholesale price index (WPI) data will provide a breather to both the government and the central bank after consumer price index (CPI) data released on Monday also showed retail inflation marginally eased to 6.26% in June while remaining above the upper limit of the Reserve Bank of India’s inflation target for the second straight month.

Gaura Sengupta, India economist at IDFC First Bank said WPI inflation tends to reflect global inflation pressures more fully as it gives a higher weight to fuel and other commodities while CPI gives a higher weight to food and services, both of which are driven more by domestic dynamics. Aditi Nayar, chief economist at ICRA Ratings said while not a central driver, the continuing double-digit WPI inflation and its potential future spillovers into the CPI inflation will inject uneasiness into the tone of monetary policy. “With the CPI inflation likely to have peaked, we expect policy normalisation to commence in Q4 FY22, after the growth revival solidifies,” she added.