What is a Sniffing Attack and How Can a Company Prevent it? 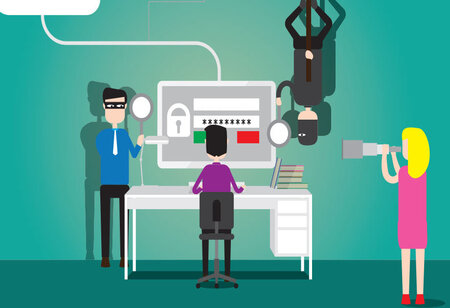 The range of cyber-attacks is rising by the day, and newer tactics are being used by fraudsters to deceive people and steal their resources and Sniffing is one of the most basic hacking attacks. Sniffing attacks are performed to steal consumer information and are carried out across secure and safe networks. The attacks entail continuously tracking and capturing data transmitted over the network through streams. Trying to interfere with data transmission and retrieving data is done with specialized spyware.

1. Passive Sniffing –
On networks connected by machines that receive traffic on one port and then retransmit it to other ports – this form of sniffing may be used. As a result, if a sniffer system is installed at the hub, the hacker will be able to intercept the traffic. Fortunately, networks are being phased out in favour of switches as a result, hackers are turning to active sniffing attacks.

2. Active Sniffing –
The sniffer will invade the connection with fake requests during active sniffing, causing the Data structure to fill up. The channel will serve as a switch until the CAM is completed, sending network traffic to all ports. This is now legal traffic that is routed across all ports, and the intruder will sniff the traffic from the switch in this way.

How to Prevent Sniffing Attacks?

1. Avoid Public Wi-Fi –
Hackers use public Wi-Fi as one of their top choices for cyber-attacks and many victims of crime interact while realizing the risks involved. If you do use public Wi-Fi, use a VPN service to safeguard your data and secure you from these types of attacks.

2. Network Monitoring –
Networks should be checked for any cyber threats or illegal tools set up in timeframe mode to intercept traffic, the Data centers must also keep an eye on the system to ensure system security. The IT team may use a variety of methods to detect sniffers in the network, for an instance is connectivity control, as well as an audit of devices set to routers.

3. Use Encrypted Platforms –
Although a VPN authenticates your network traffic, this doesn't always resolve all of your challenges – particularly if your devices or messaging platforms are not really end-to-end encrypted. Seek out those who safeguard your privacy and protection, these detailed guides for encrypted email platforms and encrypted messaging applications can be found here.

4. Authentication –
Encrypt any piece of data that passes your machine, this ensures that even though the traffic is sniffed, the intruder will be unable to understand it. One thing to keep in mind is that protection is based on the defence-in-depth theory. Encrypting the data does not guarantee that it is encrypted, the attacker can be able to collect a large amount of data and use crypto attacks to extract information. The use of secured protocols means that traffic is encrypted and protected.

5. Conduct Regular Scans –
In order to detect any attackers, run frequent scans on your connected devices. Several methods can be used by network administrators and the IT team to capture sniffers before they do any harm, they can keep track of network use and inspect devices that have been set to real-time.