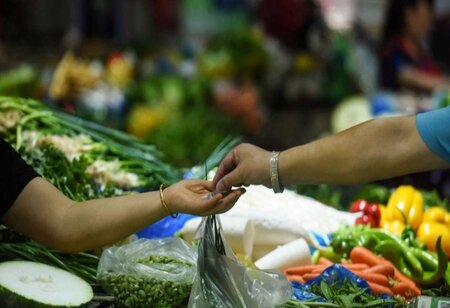 The country’s retail inflation, which is measured by the Consumer Price Index (CPI), rose to 6.95 per cent in the month of March. Separately, India’s factory output, measured in terms of Index of Industrial Production (IIP), witnessed a growth of 1.7 per cent in February, two separate data released by the Ministry of Statistics & Programme Implementation (MoSPI) showed on Tuesday. The retail inflation for the month of February was 6.07 per cent.

This is the third consecutive month that the CPI data has breached the Reserve Bank of India’s (RBI) upper margin of 6 per cent. The government has mandated the central bank to maintain retail inflation at 4 per cent with a margin of 2 per cent on either side for a five-year period ending March 2026.

The CPI data is mainly factored in by the RBI while making its bi-monthly monetary policy. Last week, the Monetary Policy Committee (MPC) of the central bank unanimously decided to keep the repo rate unchanged for the 11th time in a row at 4 per cent while maintaining an ‘accommodative stance’ but added that it will start focusing on withdrawing this stance to rein in inflation while supporting growth.

RBI Governor Shaktikanta Das in his speech said that given the excessive volatility in global crude oil prices since late February and the extreme uncertainty over the evolving geopolitical tensions, any projection of growth and inflation is fraught with risk, and is largely contingent upon future oil and commodity price developments.

The Consumer Food Price Index (CFPI) or the inflation in the food basket also spiked on-month during March to 7.68 per cent, from 5.85 per cent in February, the data revealed.

The spike in the food basket was due to a sharp rise in prices of oils and fats which climbed 18.79 per cent on year in March. Apart from this, the vegetable prices saw a rise of 11.64 per cent while that meat and fish gained 9.63 per cent and spices rose 8.50 per cent. Non-alcoholic beverages spiked 5.62 per cent last month, cereals and products climbed 4.93 per cent and milk and products rose 4.71 per cent.

Apart from food and beverages, the fuel and light segment rose 7.52 per cent, clothing and footwear gained 9.40 per cent, housing segment inched up 3.38 per cent and the pan, tobacco and intoxicants climbed 2.98 per cent.

India’s factory output, which is measured in terms of IIP witnessed a growth of 1.7 per cent year-on-year to 132.1 during the month of February, separate data released by the MoSPI showed.

The industrial growth so far in the fiscal year 2021-22 (April-February) has surged 12.5 per cent, compared to a contraction of (-)11.1 per cent rise in the corresponding period a year ago, the data showed.