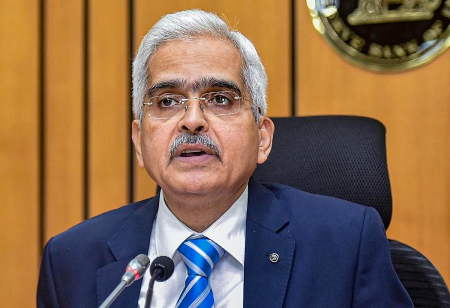 Reserve Bank of India governor Shaktikanta Das on Wednesday announced that the repo rate and the reverse repo rate will remain unchanged at 4 per cent and 3.35 per cent, respectively, and the accommodative stance will go on as long as it will be needed. For the fifth time in a row, the policy rates have remained unchanged. The monetary policy committee has unanimously voted for the accommodative stance to sustain growth on a durable basis and continue to mitigate the adverse impact of Covid-19 on the economy while ensuring that inflation remains within the target going forward", the governor said, adding that the focus of the domestic economy should to containing the spread of the virus and economic revival.

2021 has seen a bumper food grain production, which will see a softening of the cereal prices, the MPC noted. "The recent surge in infections has, however, imparted greater uncertainty to the outlook and needs to be closely watched especially as localised lockdowns could dampen the improvements in the demand conditions and delay the return of normalcy," the Governor said.

The IMF on Tuesday projected an impressive 12.5 per cent growth rate for India in 2021, stronger than that of China

The committee has also expressed concerns over the fresh surge in the number of Covid-19 infections but hopes the vaccination drive will give a fillip to the growth.

Experts expected "dovish" stance amid the rise in inflation, rise in the number of Covid-19 cases and the imposition of fresh restrictions in some parts of the country. "Given the rise in the spread of coronavirus and the imposition of fresh restrictions to contain the virus spread in the major parts of the country, the RBI is likely to continue with its accommodative monetary policy stance in the upcoming MPC meeting," Brickworks Ratings said in a statement.

The IMF on Tuesday projected an impressive 12.5 per cent growth rate for India in 2021, stronger than that of China. The Washington-based global financial institution, in its annual World Economic Outlook ahead of the annual Spring meeting with the World Bank, said the Indian economy is expected to grow by 6.9 per cent in 2022.