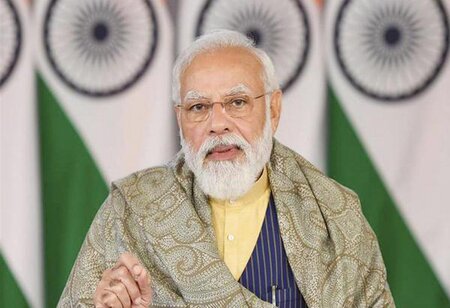 "Glad to meet Young Liu, Chairman, Foxconn. I welcome their plans for expanding electronics manufacturing capacity in India, including in semiconductors," Modi said in a tweet.

The Taiwan-based company is also planning to set up an EV manufacturing plant in India.

Foxconn's EV manufacturing arm, Foxtron, is planning to set up manufacturing plants at various locations in southeast Asia, including India.

"Our push for EV manufacturing is in line with our commitment of Net Zero Emission," the prime minister said in the tweet.

Liu also met Akarsh Hebbar, Vedanta Group's Global Managing Director of Display and Semiconductor Business, to discuss next steps for their proposed partnership to manufacture semiconductor chips in the country.

Vedanta and Foxconn signed an MoU in February to form a joint venture company in India.

Vedanta will hold 60 per cent of the equity in the JV while Foxconn will own 40 per cent.

"The Vedanta-Foxconn partnership will, in the coming years, arrest the electronic component import bill of around $100 billion. Vedanta and Foxconn are in discussion with some state governments, to finalise the location of semiconductor units soon," the companies said in a statement.

This is the first joint venture in the electronics manufacturing space after the announcement of the production-linked incentive (PLI) scheme for semiconductors and display manufacturing.

Vedanta is planning to invest around $15 billion in a phase-wise manner over the next 5-10 years to build displays and semiconductor chips in India.

The JV will look at setting up a semiconductor manufacturing plant in the next two years, said the companies.

India, which aims to become a global semiconductor hub in coming years, is set to pump $30 billion into its technology sector to achieve independence on chips so that it isn't "held hostage" to global suppliers.

The Indian government recently announced an outlay of Rs 76,000 crore (around $10 billion), under its production linked incentive (PLI) scheme, separately for the development of a semiconductor and display manufacturing electronics ecosystem.

In the last few years, India has been actively promoting cooperation with Taiwan in trade, investment, tourism, culture, education, and people-to-people exchanges. Both the countries have also constituted teams for the expansion of fruitful collaboration in education and skill development.