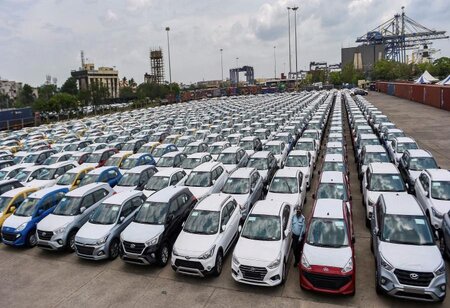 Passenger vehicle (PV) and two-wheeler sales fell in double digits in the month of April as a sharp rise in Covid-19 cases and lockdowns in several states hit production and delivery of vehicles to dealerships.

Sales of cars, SUVs and minivans declined 10% sequentially during the month to 261,633 units, showed data released on Wednesday by the Society of Indian Automobile Manufacturers (Siam).

Vehicle sales were hit initially due to lockdown measures imposed in Maharashtra to contain the spread of Covid-19. Similar steps were implemented in other parts of the country from the second half of April, which further impacted sales.

Vehicle sales are usually compared on a corresponding basis, but in April last year, automakers had to shut factories and showrooms as the government imposed a strict nationwide lockdown from the last week of March. Subsequently, operations remained suspended till the first week of May and in some cases, early June. Automobile sales in India are counted as factory dispatches and not retail sales. This affected the sales performance in April as some automakers reduced the production due to shutdown of dealerships.

Rajesh Menon, director general of Siam, said the second wave has affected vehicle sales in April through weak demand and closure of dealerships.

The wholesale data for automobiles in April is in line with the retail numbers issued by the Federation of Automobile Dealers Associations (Fada) on Monday. Showroom sales of passenger vehicles fell 25.3% to 208,883 units, while motorcycles and scooters recorded a 27.6% decline to 865,134 units.

“Supply chain-related production challenges continue with the lockdown restrictions in many parts of the country. Demand has been impacted by the second wave, both in terms of low consumer sentiment and closure of dealerships due to lockdowns,” said Menon.

He said some automakers are instead using their facilities to improve the supply of medical oxygen in the country. Dispatches of two-wheelers fell 33.5% sequentially in April to 995,097 units. This is because of a 32.8% fall in motorcycle sales to 667,841 units and a 34.3% dip in scooter sales to 300,462.

The rapid spread of Covid-19 in rural areas has dampened customer sentiment during the wedding season. Also, two-wheeler demand, especially in the entry-level segment, has been softening for the past few months as companies raised prices to offset higher input costs, while public transport also resumed. Siam did not provide data for commercial vehicle sales for April.

The wholesale data for automobiles in April is in line with the retail numbers issued by the Federation of Automobile Dealers Associations (Fada) on Monday. Showroom sales of passenger vehicles fell 25.3% to 208,883 units, while motorcycles and scooters recorded a 27.6% decline to 865,134 units.