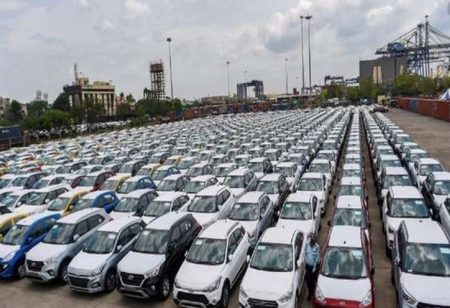 Automobile dealers' body FADA on Tuesday said passenger vehicle (PV) retail sales in February has witnessed an increase of 10.59 per cent to 2,54,058 units on account of low base of the last year. According to the Federation of Automobile Dealers Associations (FADA), that collected vehicle registration data from 1,274 out of the 1,481 regional transport offices (RTOs), PV sales stood at 2,29,734 units in the month of February 2020.

Commenting on the sales data, FADA President Vinkesh Gulati said the passenger vehicle sales witnessed double-digit growth last month on the low base of last year. Sales had dropped in February last year as the transition process from BS-IV to BS-VI emission norms had begun during the period.

"Besides the global semiconductor outrage kept the waiting period of passenger vehicles as high as eight months. FADA survey showed that 50 per cent dealers lost over 20 per cent sales due to non-availability of vehicles," Gulati said. Two-wheelers continued to see sluggish demand as the new wave of COVID-19 in certain states kept customers away, he added. Besides, high fuel prices have also led to sluggish sales in the segment, Gulati said.

Commenting on commercial vehicle registrations he noted that offtakes continue to be impacted due to financing issues and negligible sales of passenger buses due to closure of educational institutes. Besides, supply side constraints have also impacted the registrations, Gulati said. On outlook, he said that high fuel prices would continue to negatively impact on two-wheeler and commercial vehicle sales.

"The Federation also urges the Union Government to hold diplomatic discussions with countries manufacturing semiconductors (Taiwan and other similar countries) so that the momentum which was built so far in auto sales is not lost and the industry continues to fuel the recovery process," Gulati said. Overall, FADA continues to remain guarded in its optimism for vehicle registrations in March, he added.