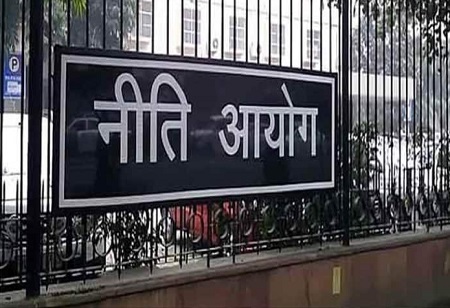 Though the government has not yet taken any decision on extending the Pradhan Mantri Garib Kalyan Anna Yojana (PMGKAY) beyond its September 30 deadline, its think tank Niti Aayog is said to be of the view that the scheme should not be continued further.

Sources privy to developments in Niti Aayog said that the scheme -- under which free food grains are provided to poor (covered under the National Food Security Act provisions) to ease the hardships they faced when the Coronavirus pandemic had erupted in 2020 -- should not be extended beyond September as the situation vis-a-vis availability of food grains has improved in the last two years.

A view within Niti Aayog is that though there are adequate stocks of rice and wheat, the two commodities which are provided to the beneficiaries under the scheme, these cannot be distributed free of cost for a long period of time as the situation has returned to pre-pandemic levels.

Also, the beneficiaries receive ration through the public distribution system (PDS) and the food grains being provided under PMGKAY are over and above that, so they won't face any problems now even if the scheme is discontinued, sources pointed out.

While discussions within Niti Aayog on these lines are still at a preliminary stage, the government on its part has not yet taken any decision on extending the scheme beyond September.

Food and consumer affairs department officials, when contacted, said that no decision has yet been taken on PMGKAY's extension.

Under PMGKAY, 5 kg of food grains consisting of either rice or wheat is provided free of cost to the poor. The scheme is scheduled to end on September 30.

The scheme was launched in March 2020 by the government, just days after the nation-wide lockdown had been imposed, to reduce the hardships being faced by the poor at that time.

Since then, it has been extended many times and the last extension was effected in March 2022, which is to end on September 30