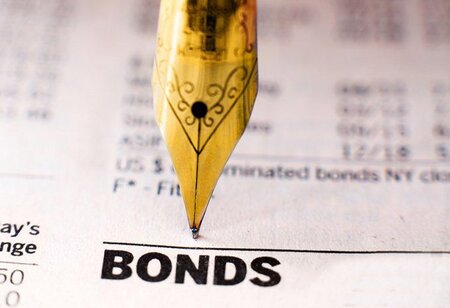 Indian bond yields surged on Monday, tracking a rise in U.S. Treasury yields and as underwriters sold off bonds in the open market they were forced to buy at an auction on this Friday. Bond yields have seen an upward bias as investor appetite has been low despite the Reserve Bank of India's assurance that it would provide ample liquidity and at the same time ensure a smooth government borrowing programme.

On Friday, underwriters bought 108.94 billion rupees worth of 10-year bonds and 107 billion worth of 5-year debt in an auction at cut-off yields as the RBI did not want to accept higher yields demanded by bidders. The RBI had set out to sell 110 billion rupees of each of these bonds along with two others. On Monday, the benchmark 10-year bond yield was at 6.19% as of 0930 GMT after rising to 6.21% earlier, its highest since Aug. 24. It had ended at 6.13% on Friday.

The benchmark 5-year bond yield was trading at 5.77, after rising to 5.82%, its highest since April 16. "Overall fundamentals are not supporting yields going down. Unless RBI intervenes on a continuous basis, yields will keep going up," said Harish Agarwal, a fixed income trader at First Rand Bank.

The benchmark 5-year swap rate jumped to 5.35%, its highest since Feb. 5, 2020, with foreign banks continuing to pay higher forward premiums on expectations of interest rates going up

Traders are expecting the RBI to not roll over the variable rate reserve repo auction this week to prompt buying of bonds instead of parking funds with the RBI. The RBI is also scheduled to conduct a special open market operation worth 100 billion rupees on Feb. 25, where it will simultaneously buy and sell bonds.

"While this significant increase in bond spreads is a manifestation of the nervousness of market players, we believe the central bank will have to resort to unconventional tools to control the surge in bond market yields," State Bank of India chief economist Soumya Kanti Ghosh wrote in a note.