India To Grow at A Possible Rate of 7.8% In FY23; Rising Commodity Prices Can Pose a Downside Risk: Crisil 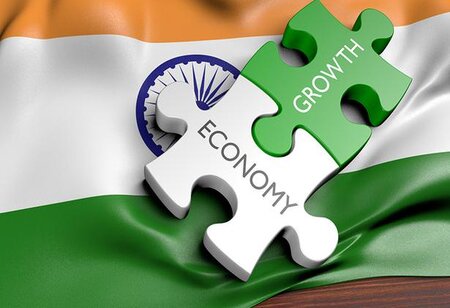 Expected to grow by 7.8 per cent in 2022-23, Indian economy is majorly driven by the government’s determination to push infrastructure spending and likely upsurge in private capital expenditure, rating agency Crisil has recently announced on 10th of march. The rating agency, however, warned that the ongoing Russia Ukraine war and mounting commodity prices do pose a downside risk to the growth. The country is expected to register a growth rate of 8.9 per cent in the current fiscal ending March 31.

“Any potential upside due to the early end of a mild third wave of COVID-19 infections will be offset by the ongoing geopolitical strife stemming from Russia’s invasion of Ukraine, which is creating a dampening effect on global growth and pushing up oil and commodity prices. The risks to growth are also tilted to the downside,” it said.

As for the average Consumer Price Index (CPI)-based inflation, he said, it will stay firm at 5.4 per cent next fiscal – if the price of crude oil averages USD 85-90/barrel – and takes into account the excise duty cuts announced last year.

However, upside risks will build if the geopolitical strife prolongs, keeping oil and commodity prices higher for longer.

Interestingly, when the price of crude oil averaged USD 110/barrel between fiscals 2012 and 2014, inflation was in double digits. That situation is unlikely to repeat this time due to the relatively benign domestic prices of foodgrains following sumptuous agricultural output, and comparatively lower core inflation.

During that period, he said, food and core inflation, which together have 86 per cent weight in CPI, had averaged 9.8 per cent and 8.6 per cent, respectively.

“We believe the fiscal policy will need to be deployed more aggressively than envisaged in the Union Budget for next fiscal. This can be done by increasing allocation for employment-generating schemes and food subsidy, and cutting duty on petroleum products,” Joshi said.

This can be a relief bridge for those most affected by the pandemic till such time the virtuous cycle of investment-led growth plays out in the labour market, and private consumption demand becomes self-sustaining, he noted.

The near-term impact of high oil prices on inflation, assuming a significant passthrough, will be more pronounced than on growth, it said, adding all bets are off if oil stays around or above USD 100/barrel for a prolonged period.

The ripple effects of higher commodity prices have been reflected strongly in the operating profitability of India Inc during past cycles.

This time around, pass-throughs have been good and hence we expect the earnings before interest, tax, depreciation and amortisation (Ebitda) margin to sustain above 20 per cent for the second year in a row for the top 700 corporates (excluding oil and banking, financial services and insurance, or BFSI) this fiscal, as per the report.

The recovery next fiscal will be broad-based, supported by normalisation of volumes if geopolitical and other unforeseen events don’t pose significant challenges, it said.

“Across consumption segments, recovery curves have been staggered and income sentiment will be the key driver. As things stand, we expect India Inc to see revenue growth of 10-14 per cent next fiscal,” the report added.

While utilisation levels in legacy sectors do not support a rounded capex recovery, spending under schemes such as Production Linked Incentive (PLI) may result in industrial capex rising to above Rs 4-4.5 lakh crore on average in the medium term (through fiscal 2026) compared to Rs 3-3.5 lakh crore in the three years through fiscal 2020.

India’s investment focus is now shifting towards green capital expenditure, with an expected spend of over Rs 2.85 lakh crore per annum over fiscals 2023 to 2030, accounting for nearly 15-20 per cent of total investments – into the infrastructure and industrial sectors – per annum, it said.