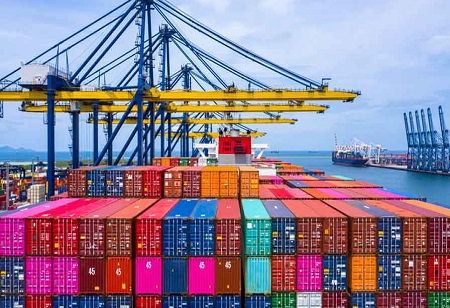 India’s trade gap with the United Arab Emirates ballooned fourfold in the May-June period, the first two months since the India-UAE free trade agreement came into effect, driven by a jump in oil and gold imports.

The country’s trade deficit with the UAE widened to $3.92 billion in the two-month period from $980 million the year earlier.

India, too, made gains, with its exports to the West Asian nation rising 17.5% to $5.4 billion. On the other hand, imports grew 67% to $9.3 billion in the period, mainly due to a spike in oil shipments in both volume and value terms amid soaring global prices.

However, unlike its imports, Indian exports mainly comprised value-added and finished goods such as textiles, gems and jewellery, machinery, footwear, and automobiles.

The widening trade gap is not a major concern as India largely imports raw materials from the UAE, said Arpita Mukherjee, a professor at ICRIER, an economic policy think tank.

“The growth in exports, post the trade agreement, shows that the trade accord is going to benefit exports. I am not very worried about imports. We have to import raw materials, intermediate goods and goods that are not produced in the country," Mukherjee said.

Countries such as China, the US and India are scouring the world to secure raw materials and energy supplies to feed their industry and boost economic growth.

In that context, the trade accord with the UAE, a key energy supplier and a significant market, may offer long-term benefits to India.

India’s gains in exports to the UAE were most visible in sectors where it gained duty-free access under the Comprehensive Economic Partnership Agreement (CEPA), which came into effect on 1 May.

While footwear exports surged 73% in May, gems and jewellery exports grew by 33%, tea, coffee, and spices rose by 50%, ready-made textiles by 42% and automobiles by 192%.

As a result, exporters expect India to sell $40 billion of goods to the UAE in the current fiscal year from $28 billion in FY22.

“The first month is very impressive despite the fact that many sectors are still preparing to exploit their potential. We should look for exports of $35-40 billion this fiscal year," said Ajay Sahai, director general and chief executive of the Federation of Indian Export Organisations.

Product-wise segregated data is not available for June yet.

Pharma exports also reported a 52% growth. The pact provides that Indian pharmaceutical and medical products will get regulatory approval within 90 days of regulatory approval in developed jurisdictions such as the US, UK, European Union, Canada and Australia. Vegetable exports surged 147%.

For the first time, the pact has listed 17 agencies from the Indian side, besides the Export Inspection Council, to issue certificates of origin to exporters digitally. They include the Spices Board, Coir Board and Tobacco Board. This facilitates faster clearances and trade.

The pact has eliminated duties for 90% of India’s exports in value terms to the UAE, covering sectors including gems and jewellery, textiles, leather, and engineering goods.

“May was the month of Ramadan with fewer working days. It is over the next few months that we will get the real trend in exports. The imports are higher largely due to high-value petroleum imports. UAE is India’s third largest partner, and the agreement will help Indian exporters increase sales in the African and Arab markets. In the next five years, we aim to touch $100 billion trade in goods and $15 billion in services," a government official said, requesting anonymity.

A commerce department official said, “India-UAE CEPA has been brought into force only recently. It’s not advisable to draw any inference or conclusion about business direction or trends prematurely from one month’s data, although bilateral trade has been put on a high-growth trajectory through the India-UAE CEPA. Data from many months would be necessary for a meaningful analysis. Needless to say, both sides are expected to gain from different aspects of India-UAE CEPA over a period of time."

While exports of petroleum products such as petrol and diesel more than doubled during May, crude oil imports more than tripled, leading to the trade imbalance.

Of the $4.9 billion worth of imports from the UAE in May, oil imports were worth $2.9 billion. Excluding oil, imports from the UAE rose by 43%, while exports declined 11% during the month. Petroleum imports in volume terms grew by 62% in May over the corresponding month last year. India imported crude oil at about $109 a barrel in May and at $116 in the following month.

India has developed a trade deficit with the UAE since FY20 as it buys more oil from the West Asian nation. For example, in volume terms, petroleum imports tripled in FY22, and the trade deficit widened to $16.8 billion from $10 billion in the previous year. Pearls imports grew by 28% in May, and gold imports grew by a whopping 248%.

India has extended a 1% duty concession for gold imports from the UAE for up to 200 tonnes of inbound shipments under the trade pact. India has also offered significant tariff concessions on dates, petroleum products, petrochemicals, metals, and minerals to the UAE under the pact.

Biswajit Dhar, a professor at Jawaharlal Nehru University, said, “These are the initial signs of the benefits that India could secure from the CEPA. However, Indian businesses would have to ensure that these initial gains are sustained. That’s the critical issue."

The pact, negotiated in record 88 days, was signed between the two sides on 18 February. It is the first major free trade pact signed by the Narendra Modi-led government since it came to power in 2014 and is likely to benefit about $26 billion worth of Indian products that are subjected to 5% import duty by the UAE.