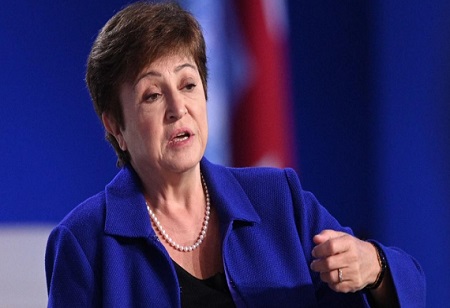 International Monetary Fund (IMF) managing director Kristalina Georgieva said India effectively used its financial resources in the aftermath of the covid pandemic as accelerated digitization and digital public infrastructure helped improve tax collections and target aid to the needy. In an interview, Georgieva said India’s covid response, which she termed prudent and not oversized, kept the buffer for further support during an evolving crisis. Georgieva, who began her career in public service at the World Bank as an environmental economist in 1993, hopes India will ease export curbs on food items as more clarity emerges on domestic food supplies. The IMF, Georgieva said, will extend its support to India’s cause for stepping up private finance in climate action to emerging market economies under its upcoming presidency of G20. India will take over the presidency of G20 on 1 December for a year and host the group’s summit in 2023.

The biggest concern for emerging market economies is that in a world hit by multiple exogenous shocks, there is a natural tendency for capital to seek safety in advanced economies. We also recognize that emerging market economies had less fiscal space, to begin with when the first shock of the pandemic hit. Advanced economies spent about the equivalent of 28% of their GDP on average to support their people and businesses, while emerging markets spent 6-7% (of GDP on average) and low-income countries around 2-3%. In addition, emerging markets during the pandemic and subsequently striving for recovery exhausted a lot of their fiscal space, placing them on a weak footing. Once Russia’s war on Ukraine started, stubborn inflation pressed for aggressive monetary policy action. Now, we see the increase in interest rate in the US leads to an appreciation of the dollar and depreciation of the currencies in emerging markets, which puts additional wind in the sail of capital being drawn to the US.

However, thank God, there are some silver linings. First, emerging markets have built some strong forex reserves and sound macroeconomic policies. This is a very valuable protection for them. They did not have it a decade or so ago. Second, many emerging markets quickly recognized that inflation may not be transitory and (they needed) to take policy action early. As a result, several emerging markets are better off in that regard.

I am full of admiration for what India has achieved in digitalization. I understand that the pandemic was a mixed blessing. It was terrible for people and the economy, but it put digitalization on steroids. The result is for everyone to see. We have in India better fiscal policy because taxation and public spending are placed on a digital platform. Tax collection improves, and the targeting of subsidies improves—meaning that limited fiscal space is better deployed. We see financial inclusion really working, and we see more attention to the quality of education.

Economies have taken different approaches to recover from the pandemic, with many preferring supply-side interventions and infrastructure spending as we have, while some focused on putting money in the hands of people directly. Which approach, in retrospect, has been more effective?

There is value in supply-side support, and there is value in demand-side support. Investing in infrastructure is a way in which there is prompt support for the recovery. We also have seen countries very successful with policy actions supported through fiscal means in job retention, protecting jobs, and giving employers subsidies to keep workers on the payroll. This is a recovery-friendly action. We have seen well-targeted support in some countries with very limited fiscal space—money going directly into the hands of people—being the right approach because taking longer-term measures like investment measures or job retention measures where jobs are primarily in the formal sector doesn’t give a helping hand to the most vulnerable people whereas this does.

In India, there was less support in the hands of people, but it was well targeted because of digitalization. India did indeed come back up with the speed generated by this investment in infrastructure in its recovery. It (India’s economy) shrank in 2020 (fiscal ending March 2021), but in the next year, India came back to 8.7% growth. India made this very significant swing from a contraction to growth partially because it felt this recovery mindset is how you use your fiscal space.

India built an incredibly agile foundation for a time of shock through digital ID and digital public infrastructure. That is the biggest advantage India had at the outset of covid. I hope that during the G20 presidency, all the countries take this page from the Indian book for themselves. Also, we saw prudent fiscal policy at the time of covid in India. There was support, but it wasn’t oversized. When the time came to face another crisis, India was not completely out of the buffer. Also, India has sound foreign exchange reserves. There is a lot that India has done right; particularly impressive is the vaccination of the Indian population and how it has been done with the support of digital India. I can tell you; it suffered badly due to deaths. What it showed India was how health systems are not strong enough. A problem was identified, but it led to more investment in health systems, not just vaccines. What I found very encouraging is that India is very interested in learning from other countries. The Prime Minister told me that, especially in digitalization, India has a lot to share and also a lot to learn from other countries.

There is a lot of concern that China has emerged as a lender to many distressed economies. For example, Pakistan owes three times as much to China as it does to the IMF. The share of countries in distress has doubled since 2015 among low-income countries from 30% to over 60%. Among emerging market economies, nations accounting for around 25% are in debt distress. These are very troubling numbers. What is even more troubling is that conditions are going to get harsher with interest rates going up and for those that have borrowed in dollars, with the dollar also appreciating.

When we look at this problem, from the beginning, from 2020, together with the World Bank, we have been calling for much more attention to debt resolution. We led the debt standstill that took place, the so-called Debt Service Suspension Initiative. We have advocated for the G20 Common Framework for debt treatment to become more systematic and, most importantly, incentives for countries to step forward. For example, if a country requests treatment under the common framework, it should immediately be granted that debt standstill, so it has space to come to a resolution. We also strongly focus on debt transparency because debt is like an iceberg—you see the top, but you do not see what is underneath. Our appeal to large creditors is that because of their size, they must be a leading part of the solution, and we have been engaging both China and the private sector. Our cooperation on the topic is very important because, ultimately, we cannot easily lend to a country with unresolved debt issues.

I want to say that debt is not necessarily bad. If it turns into a productive growth-generating investment that leads to payment streams that cover the cost of debt. But that has not always been the case. We have seen quite a few—the jargon is white elephants—now turning into a huge liability for countries. There is a silver lining because we got the first country—Zambia—with an agreement of its creditor committee and trying to play a constructive role in getting to this agreement in one month from the establishment of the committee.

It is very important that creditors recognize that not only is (early debt resolution) their responsibility but also in their own interest because we know from past experience that when the longer it takes to reach a resolution, the more expensive it becomes for the debtors and creditors.

So we very much count on India during the G20 presidency to press for the common framework (for debt treatment) to come up with the rulebook—what are the steps in this process and the steps to be followed to include countries in distress like Sri Lanka and also to look for ways in which there are incentives for the early ‘knock on the door’ by countries needing that resolution. The more you wait, the worse the situation becomes.

The conversations I had here have been very inspiring because they show a country that is determined to take responsibility at a particularly complicated time, to bring the voice of emerging markets and developing economies more strongly to amplify the concerns of these countries in the context of the G20.

One topic on the top of the mind is macroeconomic policies—that is, how to secure macroeconomic and financial stability. 2023 will be a difficult year, and how to reduce the pain by collective action. That seems very encouraging. Second, clearly, there is a lot of interest in digitalization. This is a big benefit of the pandemic, and India is a leader here. In fact, we received requests to contribute more to both the digital public infrastructure and, more specifically, to regulating crypto assets. It is high time for regulation. Indeed we agree—the minister of finance (Nirmala Sitharaman) brought this point quite forcefully. There is also strong interest from India in advancing private finance. It is clear that unless the work is successful in bringing more private finance and more technology to emerging markets and the developing world, we will not be successful in the fight against climate change. It is paramount for our survival. It is actually existential for success in that area. Prime Minister Modi has been a very strong voice for more financing. I am proud that we at the IMF, during India’s G20 presidency, will demonstrate our commitment to bring more money to the emerging markets with the creation of our resilience and sustainability trust. It will start with $40-45 billion. We intend to build it up. Most importantly, our determination is to generate private capital flows with this money. In other words, (to let) countries use it to remove barriers for private finance both in mitigation and adaptation. One of the first countries we expect to become a beneficiary is Bangladesh. We also talked about debt sustainability; of course, India is right to consider this a concern. India is a partner to many developing countries. India has an interest in having early and effective debt resolution.