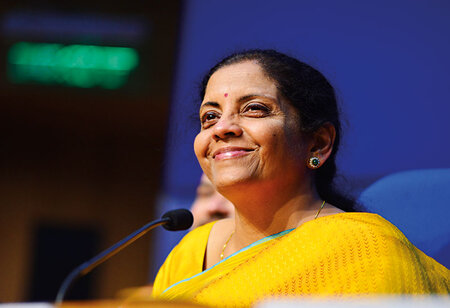 The government will continue on the path of fiscal consolidation, reaching a budget deficit of less than 4.5% of gross domestic product (GDP) by 2025-2026, Finance Minister Nirmala Sitharaman said in her budget speech. The government expects a fairly steady decline over the years. “We achieved integration, firstly by increasing tax revenue levitation through improved compliance, and secondly by increasing revenue from monetization of assets, including public sector businesses and land. I want to do that,” said Sitharaman, who estimates that the current fiscal year is 9.5% of GDP. The center estimates that the deficit will be 6.8% of next year’s GDP and that next year’s total borrowing from the market will be around Rs 12 lakh Crore.

The government said fiscal policy continues to be guided by the principles of gradual reduction of deficits and progressive movement towards fiscal consolidation. “The government is well aware of the need to maintain close financial planning, but the lack of financial flexibility to achieve the FRBM (Financial Responsibility and Budget Control) goals is domestic and global. It is not recommended in the light of the country’s expected socio-economic growth and prosperity in the face of ever-changing scenarios and challenges. In the current situation, the need for higher public spending provides the impetus for economic growth. It feels important to provide,” said the Ministry of Finance in its Medium-Term Fiscal Policy and Policy Strategy Statement.

However, Moody’s Investors Services, a global rating agency, questioned the government’s ability to meet tax and monetization goals and pointed out the need to invest in major sectors. “India’s new central government budget deficit target of 6.8% seeks to balance growth support with modest deficit reduction, but improving tax compliance and monetization targets may be difficult to achieve. At the same time, the government has limited room to cut spending without further weakening growth, and nominal GDP growth remains important for future deficit reduction,” Moody said.