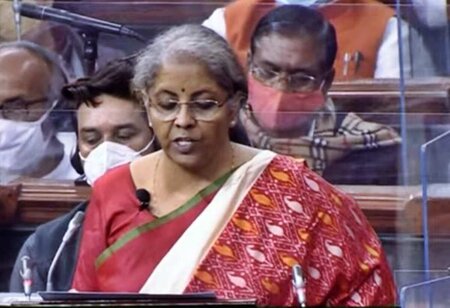 India’s Finance Minister Nirmala Sitharaman presented India’s first Budget post the COVID-19 Pandemic at the Parliament today on 1st February, 2021. Highlighting the extraordinary circumstances at which the Budget is being presented amid pandemic, Finance Minister Nirmala Sitharaman recalled the pandemic-induced lockdown, PM's Garib Kalyan Yojana, and the essential services continuing despite lockdown.  She expressed her gratitude to the frontline workers during her speech.

Before starting her speech, she quoted Rabindranath Tagore: “Faith is the bird that feels the light when the dawn is still dark.” She also compared the economic recovery with that of India's series win in Australia.  "Team India's spectacular success in Australia reminds us of the inherent strengths of the people of India."

In the Part A of the Budget, she highlighted the vision for Atmanirbhar or Self-reliant nation and quoted "Atmanirbhar is not a new word for India. Ancient India was largely self-reliant and equally, was the epicentre of the world."

Outlining on 13 points starting with health and wellbeing, she expressed her wish to strengthen three areas: preventive, curative and wellbeing.

A new centrally sponsored scheme called PM Atma Nirbhar Swasthya Bharat Yojana at the outlay of Rs. 64,180 crores over six years to develop primary, secondary and tertiary healthcare systems. This will be in addition to the National Health mission and will support 17,000 rural and 11,000 urban health care centres. The government envisages establishing critical health care hospital blocks in 602 districts. ‘Mission Poshan 2.0’ to be launched for improving nutritional outcomes across 112 aspirational districts. An urban Jal Jeevan Mission to be launched and implemented over five years with an outlay of Rs 2.87 lakh crore. The Urban Swachh Bharat Mission will be implemented over five years.

Finance Minister Nirmala Sitharaman said that, for a five trillion-dollar economy, the manufacturing sector has to grow in double digits for a sustained period. To achieve the same, a PLI scheme has been announced for 13 sectors, for which government has committed Rs 1.97 lakh crore over the next 5 years. Recalling earlier performance linked schemes announced for the manufacturing sector, she said that seven more textile parks will be added in the next three years.

The National Infrastructure Pipeline (NIP) was launched with 6835 projects, which has now expanded to 7400 projects. The NIP will require a major increase in funding from both the govt and the financial sector.

“I will take concrete steps to do this - creating institutional structure, monetising assets, and raising the share of infrastructure expenditure in Central and State Budgets. I will introduce a bill to set up a Development Finance Institution, and have provided Rs 20,000 crore for this. We should have a lending portfolio of Rs. 5 lakh crores in three years' time," she says.

As per Ms. Sitharaman, A national monetising pipeline will be launched and a dashboard will be created to overlook the progress. "Monetising operating public infrastructure assets is a very important financing option for new infrastructure construction. A national monetisation pipeline will be launched, with a dashboard to track the progress and provide visibility to investors," she says.

The next lot of airports will be monetised for operation and management. She declared that, “A 3900 km of National Highwau work will come up in Tamil Nadu. 1,100 km of National Highway works in Kerala, including 600 km in Mumbai-Kanyakumari corridor. 600 km corridor in West Bengal. Rs.34,000 crore covering over 1000 km will be taken up in Assam, she says. It may be noted these four States will be witnessing Assembly elections later this year. I am also providing an enhanced outlay of Rs 1,18,101 crore for ports and highways.”

"We will work towards raising the share of public transport in urban areas through expansion of metro networks and augmentation of city bus services," Ms. Sitharaman says.

Finance Minister announced the inauguration of Metro services in 27 cities in which MetroLite and MetroNeo will be introduced in Tier 2 cities and peripheral areas of Tier 1 cities. Kochi Metro, Chennai Metro Phase 2, Bengaluru Pahse 2A and B, Nashik and Nagpur Metros get additional allocation.

The scheme will facilitate deployment of innovative PPP models to enable private players to provide and operate over 20,000 buses. A total of 702 km of conventional metro is operational and another 1,016 of metro and RRTS is under construction in 27 cities.

In a bid to end monopoly of power distribution, the government will create a framework to allow consumers of electricity alternatives to choose from more than one distribution company. A comprehensive National Hydrogen Mission is being launched for generating hydrogen from green power sources.

Major ports will be moving from providing operational services on their own, to a system where the private players will manage it for them, says the Finance Minister. Around 90 ship recycling yards at Alang in Gujarat are compliant with latest international norms. Recycling capacity will be doubled by 2024, this will generate an additional 1.5 lakh jobs for our youth.

A gas pipeline project will be taken up in the Union Territory of Jammu and Kashmir. City Gas Distribution (CGD) programme will be extended to 100 districts in next three years. The Ujjwala (LPG) scheme which has benefited 8 crore households thus far will be extended to cover 1 crore more beneficiaries.

FM Nirmala Sitharaman proposed to consolidate the provisions of the Sebi Act, Depositories Act, and two other laws, into a Unified Securities Market Code.

“Towards investor protection, I propose to introduce an investor charter as a right for all investors in all financial products. I propose to amend the insurance act to increase the FDI limit from 49% to 74%,” she further adds.

Deposit insurance: The government has approved an increase in the cover from Rs 1 lakh to Rs 5 lakh for bank depositors. I shall be moving amendments to streamline the provision so that depositors can get easy and time bound access to their savings to the extent of the deposit insurance. This will help depositors in banks that are currently under stress.

Two PSU bank and one general insurance firm will be disinvested this year. An IPO of LIC will be debuted this year.  Idle assets will not contribute to Atmanirbhar Bharat. Monetising of land will be taken up, she says. A SPV will be launched to carry out this activity.

“A revised mechanism will be introduced for timely closure of loss-making PSUs. Inspite of COVID-19, we kept working towards strategic sale of BPCL, IDBI Bank, Air India, which will be completed in 2021-22," states FM.

“Niti Aayog has been asked to come up with the list of companies that may be disinvested next. I have estimated receipts of Rs 1.75 lakh crore as receipts from disinvestment in 2021-22”, she adds.

Agriculture infrastructure fund will be available for APMCs for augmenting their infrastructure, she says. One of the main arguments against the new farm laws is the that these laws will put an end to APMCs. 1,000 more Mandis to be integrated into the E-NAM market place.

Five major fishing hubs will be developed as hubs for economic activity including Chennai, Kochi and Paradip. To promote seaweed farming, she proposed a multipurpose sea weed park to be established in Tamil Nadu.

After the launch of One Nation, One Ration card to help migrant workers, Ms. Sitharaman informed that ON,OR plan is under implementation by 32 states and union territories reaching about 59 crore beneficiaries.

“I propose to launch a portal to maintain information on gig workers and construction workers, this will help provide benefits to migrant workers,” she added.

Social security will be extended to gig and platform workers. This will be ensured through the four new labour codes.  Women workers will be allowed in night shift with adequate protection.

“To further facilitate credit flows for Standup India scheme for SCs, STs and women, I propose to reduce the margin capital required for loans from 25% to 15%. We have taken a number of steps to help the MSME sector in this Budget with an allocation of Rs 15,700 crore, more than double that of last year,” states Nirmala Sitharaman.

Investors have welcomed the Union Budget with cheers as the benchmark stock indices rallied close to 2% by noon.  The market rally has helped increase the overall market capitalization of stocks by about 0.75% this morning.

The biggest gainers have been banks and non-bank financial companies, which have been boosted by the Finance Minister's announcement that the Centre will set up the equivalent of a 'bad bank' to help revive the banking sector from the bad loan crisis.

Major ports will move from offering operating facilities on their own to a system that will be operated by private players for them, says the Minister of Finance. At Alang in Gujarat, about 90 ship recycling yards are compliant with the current international standards. By 2024, recycling capacity will be doubled, which will create an estimated 1.5 lakh jobs for our young people.

In Tier 2 cities and outlying areas of Tier 1 cities, MetroLite and MetroNeo will be added. There are Metro projects with low costs. Additional allocations are provided to the Kochi Metro, Chennai Metro Phase 2, Bengaluru Metro Phase 2A and B, Nashik and Nagpur Metros. "We will work towards raising the share of public transport in urban areas through expansion of metro networks and augmentation of city bus services," says Nirmala Sitharaman.

In order to enable private players to supply and operate over 20,000 buses, the system would promote the deployment of creative PPP models. A total of 702 km of traditional metro is in service and an additional 1,016 km of metro and RRTS are being installed in 27 cities.

The Union Finance Minister has proposed a new voluntary scrapping scheme aimed at phasing out old vehicles. The knowledge will be released later, as the automotive industry has long awaited the scrappage scheme. It is likely to benefit from Tamil Nadu being a major market for both commercial vehicles and personal vehicles. - Sanjay Vijayakumar.

In todays’ Union Budget for the fiscal year 2021-22, Nirmala Sitharaman announced a significant change related to women's empowerment. The details are here - In the Union Budget presentation, FM Sitharaman said that Ujjwala will be extended to one crore more beneficiaries under the free cooking gas LPG scheme. She also claimed in the announcement that a gas pipeline project in Jammu & Kashmir is to be taken up.

FM Sitharaman also announced, while tabling the budget that minimum wages would apply to all categories of employees. With sufficient security, women would be able to work in all categories and even in night shifts. Due to the coronavirus pandemic, multiple industries were majorly affected this year. Many people have lost their jobs, and women have often fallen under the job-cutting radar.