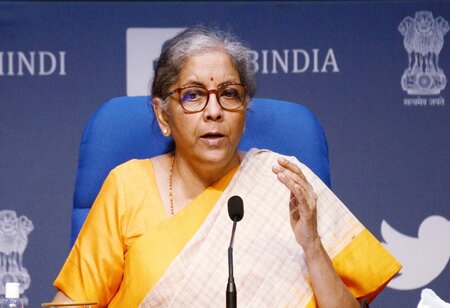 Finance minister Nirmala Sitharaman will be holding the first of a series of the customary pre-Budget consultations with various stakeholder groups on Wednesday when she meets experts from the farm and agro-processing sector. This will be the first such high-level meeting between leaders and experts from the farm sector and the finance minister since the repeal of the three contentious farm the laws late last month. Farmer leaders are now demanding that the minimum support price-based procurement drive be legalised and its coverage substantially widened.

The Budget for next fiscal is to be presented on February 1, in the backdrop of a nascent recovery of the economy, robustness in tax receipts and the continuing need for government spending to bolster the revival process. It’s expected to address critical issues of demand generation, job creation and putting the economy on a sustained path of 8%-plus growth. The various pre-Budget stakeholder meetings will be held virtually, the finance ministry said in a tweet.

The exercise comes amid fresh concerns about a new Covid strain, although the impact of the Omicron variety is expected to be less severe amid a surge in the vaccination drive.

During the course of her interactions with various stakeholders across sectors in the coming weeks, Sitharaman is expected to seek inputs for reviving private consumption, fixing supply chain bottlenecks and stirring growth impulses that were damaged by the outbreak the pandemic last year.

The focus will also be on the path of fiscal prudence after the pandemic hit the consolidation road map last fiscal. While the Centre’s fiscal deficit for FY22 is budgeted at 6.8% of GDP, some analysts expect the Centre to rein in the deficit within the target even with a clutch of additional expenditure commitments that have come up due to enhanced food and fertiliser subsidy bill and enhanced outlay to clear dues owed to exporters.

The Centre’s fiscal deficit widened to a very high level of 9.2% of GDP in FY21 due to Covid-related additional spending and revenue crunch. The announced plan is to reduce the deficit to below 4.5% of GDP by FY26. The Budget will give clarity on how and when the FRBM-mandated level of 3% fiscal deficit will be achieved.

Key secretaries of the finance ministry have already held several rounds of talks with stakeholders cutting across sectors. Both economic affairs and revenue secretaries have held talks with industry bodies, while the finance secretary concluded pre-budget meetings with various government departments on November 12 to take inputs for finalising their revised estimate for 2021-22 and budget estimate for 2022-23.

Some industry bodies have already suggested that the cut-off date be extended by two years for commencing manufacturing to avail concessional corporate tax rate of 15% and tax-free infrastructure bonds be reintroduced. Some others have suggested that the personal income tax rates be capped at 15% with no exemptions to bolster the tax base.