The value of bitcoin has seen relatively significant losses over the last week, following a period of relative stability hovering above $9,000. If it continues its poor form, it could fall below $9,000 in the coming days.

The volatile cryptocurrency’s price has shifted wildly ever since mid-December - when it hit a record high of more than $19,850 (£14,214) - with frequent heavy drops and speedy recoveries. Its price plummet back to earth in January and February, as governments and central banks around the world raised the spectre of future regulation.

It then bounced back, before tumbling again in mid-January, recovering again, and plummeting at the start of February before levelling out for the rest of the month. 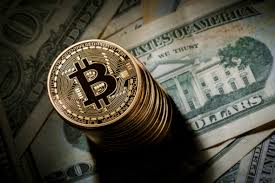 Aside from the looming prospect of regulation, a series of high-profile thefts have also had a hand in the sudden rapid dips in value bitcoin and its rivals have experienced - the most recent of which was a failed raid on the Binance cryptocurrency exchange.

Google's announcement that it would ban cryptocurrency advertising from its pages from June on the grounds that it considers it "deceptive content" was also a major blow to the sector.

Recent goings-on have demonstrated just how quickly things can change for investors.

It is worth $8,285 as of Friday morning, up from around $6,500 in early April, according to the Coinbase exchange.

Its value is down by 2 per cent since this time yesterday and down by 6 per cent week-on-week. Bitcoin's value is up less than 1 per cent from what it was one month ago.

Bitcoin's rise last year meanwhile led to increasing amounts of interest in other digital currencies, such as ethereum, litecoin and ripple XRP - all of which have performed well recently - and more and more people are now looking to invest in digital currencies.

However, there are serious fears that bitcoin has created a bubble that could burst at any moment.

Numerous financial experts have advised potential investors to avoid getting involved with bitcoin, and the US Securities and Exchange Commission has told people to "exercise caution" and be wary of scammers.

But others have speculated that it could eventually rise towards the $1m (£724,549) mark.

Bitcoin has no central bank and is not linked to or regulated by any state.

An anonymised record of every bitcoin transaction is stored on a huge public ledger known as a blockchain.