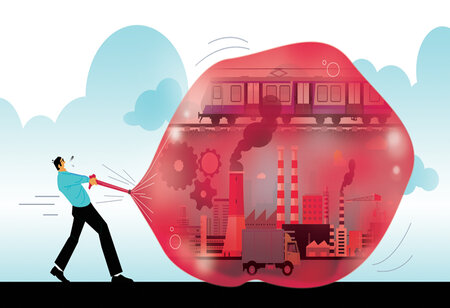 Chief Economic Adviser KV Subramanian on Monday said the impact of the second Covid-19 wave that it is not likely to be large on the economy but going forward, fiscal and monetary support will be needed to prop up growth. He, however, said it would be difficult to predict if double growth target for the current fiscal can be achieved given the uncertainty surrounding the pandemic.

The Economic Survey 2020-21 released in January this year had projected GDP growth of 11 per cent during the current financial year ending March 2022.

"Given the uncertainty about the pandemic it would be very hard to give actual numbers but assessment is that impact is not going to be very large especially also keeping in the mind that the estimates that we had made in both the Economic Survey and Budget were relatively very conservative," he said.

It is to be noted that India's economy contracted by less-than-expected 7.3 per cent in the fiscal year ended March 2021 after growth rate picked up in the fourth quarter, just before the world's worst outbreak of coronavirus infections hit the country.

The GDP print was better than the expected contraction of 8 per cent for 2020-21 as projected by the Economic Survey.

Observing that the second Covid-19 wave peaked in May, Subramanian said the localised and state-wise restrictions adopted to check the spread of the virus do present some downside risk to growth in the first quarter of the current fiscal.

"It looks like as of now that India (virus infections) peaked on May 8... I must mention that caveat related to pandemic must be kept in mind that the some qualitative estimates that we have made are subject to immense uncertainty in the trajectory of the pandemic during the year," he said, adding, the intensity of the second wave could not be even predicted by epidemiologists.

"We have assessed it by state-wise stringency index estimated for April 2021 and beyond and looking at 17 states that account for more than 90 per cent of GDP and adjusting the impact of vaccination and some pent-up demand coming back...we have made projections on that...we do think that the overall economic impact of the second wave is not going to be very large," he said.

He however, said "monetary and fiscal policy support will continue to be important going forward."

It is to be noted that the government exploring the possibility of another round of stimulus to support the economy battered by the second wave. For the MSME sector, the government announced some support on Sunday, while the Reserve Bank on the monetary side too recently announced some measures including restructuring of loans up to ₹25 crore.

Recalling that the economy had recovered well by March 2021, he said, "the momentum of that recovery has been impacted by the second wave as we saw using several of the high frequency indicators that we track".

"GDP growth recovered steadily in the second half of the last fiscal on the back of the higher government expenditure, and the rebound in the net exports," he noted.

Subramanian emphasised that the speed and scale of the second wave does lend caution to the economic impact as the economy was still recovering from last year's supply and demand shocks.

"There is an urgent need to contain the spread of pandemic – vaccination and strict observation of Covid-appropriate behaviour cannot be overemphasised," he said.

On the rising petrol price having impact on inflation, he said "we expect inflation to be range bound in the foreseeable future". The CEA further said that food grains production is projected to be at record levels this fiscal amid expectations of normal monsoon.

To control the price rise, the government in 2016 gave a mandate to the RBI to keep the retail inflation at 4 per cent with a margin of 2 per cent on either side for a five-year period ending March 31, 2021.

Commenting on GDP numbers for 2020-21 released earlier in the day, he said a contraction of 7.3 per cent is indicating an improvement over the contraction of 8 per cent estimated as per the second Advance Estimates in February 2021.

The gross domestic product (GDP) in Asia's third-largest economy grew by 1.6 per cent in the January-March period, up from 0.5 per cent in the previous quarter when India began pulling out of a steep pandemic-induced recession in the earlier six months.

These signify a steady revival of demand in the second half of the year, he said, adding, agriculture has been the silver lining of the year with 3.6 per cent growth in 2020-21.