Bitcoin Slumps Below $45,000 for the First Time after Elon Musk Hinted Tesla may sell crypto 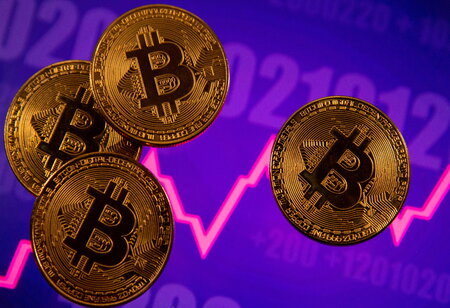 Elon Musk continued to rip off the price of Bitcoin, briefly sending it to the lowest since February after hinting in a Twitter exchange on Sunday that Tesla Inc. may sell or has sold its cryptocurrency holdings.

Bitcoin falls below $45,000 for the first time in almost three months after a Twitter post that said Tesla should divest what at one point was a $1.5 billion stake in the largest cryptocurrency which was seemed to be agreed by the billionaire owner of the electric-car maker. It traded at 45,270 as of 5:51 p.m. in New York, down about $4,000 from where it ended Friday.

Musk’s revealed in early February that Tesla used $1.5 billion of its nearly $20 billion in corporate cash to buy Bitcoin sent the token’s price to record and lent legitimacy to electronic currencies, which have become more of a mainstream asset in recent years despite some disbelief.

His latest conflict with Bitcoin started with a tweet from a person using the handle @CryptoWhale, which said, “Bitcoiners are going to slap themselves next quarter when they find out Tesla dumped the rest of their #Bitcoin holdings. The Tesla chief executive officer Elon Musk responded, “Indeed.”

An outspoken supporter of cryptocurrencies with a cult-like following on social media, Musk holds a huge impact with his market-moving tweets. He has been touting Dogecoin and significantly elevated the profile of the coin. Dogecoin is down 9.6% in the last 24 hours, trading at 47 cents, according to data from CoinMarketCap.com.

On Sunday Musk spent hours hitting back at several different users on Twitter who criticized his change of stance on Bitcoin last week, a move he said was ignited by environmental concerns over the power demands to process Bitcoin transactions. He said at the time that the company wouldn’t be selling any Bitcoin it holds.

An outspoken supporter of cryptocurrencies with a cult-like following on social media, Musk holds a huge impact with his market-moving tweets. He has been touting Dogecoin and significantly elevated the profile of the coin. Dogecoin is down 9.6% in the last 24 hours, trading at 47 cents, according to data from CoinMarketCap.com.

Musk’s Sunday social-media stunt was the latest chapter in one of the zaniest weeks in crypto world-famous for its wildness. For die-hards, the renewed fall in Bitcoin and other tokens have done nothing to deter crypto enthusiasts who say digital coins could many times their current value if they transform the financial system.

“We’re looking at the long-term and so these blips, they don’t faze us,” Emilie Choi, president and chief operating officer of crypto exchange Coinbase Global Inc., stated last week. Bitcoin was already oscillating wildly on the weekend before Musk tweeted. The two days tend to be particularly volatile for cryptocurrencies. Bitcoin’s average swing on Saturdays and Sundays so far this year comes in at 4.95%.