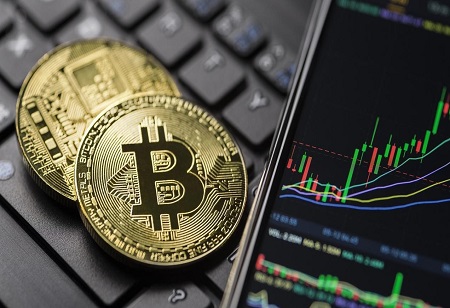 Bitcoin price today rose marginally after dipping to a more than one-week low, buffeted by investor skittishness ahead of a looming Federal Reserve interest-rate hike and amid harsher regulatory scrutiny of the cryptocurrency sector. The digital token has been trading in the range between roughly $19,000 and $22,000.

The world's largest and most popular cryptocurrency rose marginally to $21,120. The global cryptocurrency market cap today was above the $1 trillion mark, even as it was almost flat in the last 24 hours to $1.02 trillion, as per CoinGecko.

Rising interest rates and high-profile meltdowns like that of crypto hedge fund Three Arrows Capital have pummeled digital tokens this year. Bitcoin is down 55% since the start of 2022.

The turmoil is leading to ever greater regulatory oversight of the industry. Coinbase Global Inc., for instance, is facing a US probe into whether it improperly let Americans trade digital assets that should have been registered as securities, as per a report.

On the other hand, Ether, the coin linked to the ethereum blockchain and the second largest cryptocurrency, gained nearly a per cent to $1,427. Meanwhile, dogecoin price today was trading 0.5% higher at $0.06 whereas Shiba Inu also surged over a per cent to $0.000011.

Even as the crypto sector shivers in the bleak winter, venture capitalists are pouring money into digital currency and blockchain startups at a pace that's set to outstrip last year's record.

In the first half of the year, VCs bet $17.5 billion on such firms, according to data from PitchBook. That puts investment on course to top the record $26.9 billion raised last year, reported.

A double whammy of macroeconomic headwinds and blow-ups at major projects this year have seen bitcoin plummet about 65% from its November record of $69,000. Companies have shuddered as prices fall, with major U.S. exchange Coinbase Global and NFT platform OpenSea among those to lay off hundreds of workers.