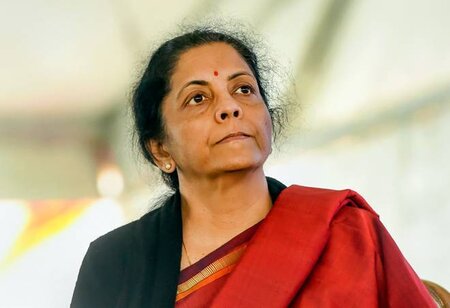 Finance minister Nirmala Sitharaman on Tuesday said that the merging of banks or privatisation of financial institutions will not hurt the interest of its employees as these are not rushed decisions and the Centre is committed to taking care of the workers. The minister's comment came as employees under the banner of the United Forum of Bank Unions are observing a two-day bank strike protesting the Centre's move for privatising banks.

"There are many banks which are performing very well. Some banks are performing just alright. But now we need banks that are able to scale up. We need banks of the size of the State Bank of India, many more. to meet the aspirational needs of this country," Sitharaman said.

Assuring that not all banks will be privatised, the finance minister said the decision to amalgamate or merging banks need not be an on-the-spot decision. "We have announced a public enterprise policy, based on which we have identified those four areas where we have said the government's presence will be there. And bare minimum presence is what we have said. In that, financial institutions are also there, meaning, even in the financial sector we will still have the presence of public sector enterprise."

"Even for those which are likely to be privatised, we obviously have to keep in mind that these privatised institutions will be going to function, after the privatisation. We will also have to ensure that every interest of the staff and personnel will be protected. So, we will ensure that we are not going to be disinvesting or we are not going to selling them off because whatever happened to them, we are not worried. No, we want financial institutions to get more equity, more people to put money into them to make them sustainable," Sitharaman said.

"We also want their staff to be able to perform their duties which they have really acquired as a skill over the decades and have run the banks," the minister said. Salaries, scale, pension-- all aspects of their service will be taken care of, Sitharaman said.