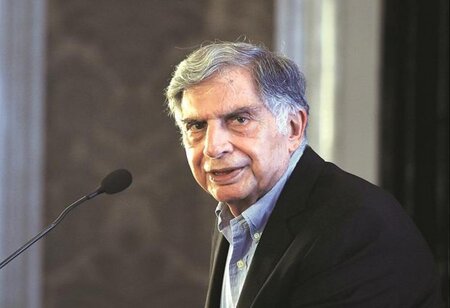 Regarded as a celebrated industrialist and philanthropist of India, Ratan Tata has played a prominent role in making TATA a household brand synonymous with loyalty and trust. Born on 28th December 1937 in Surat, Ratan Naval Tata has been bestowed with Padma Vibhushan and Padma Bhushan in the year 2008 & 2000 respectively for his prolific contribution towards trade and industry. In his more than 22 years of leadership career, Ratan Tata has successfully demonstrated prolific results by raising 50 percent profit and 40 percent revenue growth along with out of India expansion. As per a recent report, HarperCollins has got the rights to publish the authorized biography of Ratan N. Tata. The Biography by Dr Thomas Mathew will be published worldwide in November 2022.

The leadership qualities of Rata Tata are widely applauded across the globe. Counted amongst the most influential and inspirational leaders in the world, the industry stalwart has not only reaped huge profits in businesses but also transformed the lives of the employees, the communities and the society at large. The leadership style of Ratan Tata has been widely lauded by numerous intellectuals across the globe and they are quite inspirational for every individual belonging to all age groups.

Some of the innovative leadership lessons to learn from Ratan Tata, who is acclaimed for his vision as well as skill to lead and innovate, are mentioned below.

Continuous Learning is important for Success

Many people might not know this, but Ratan Tata was once offered a job from IBM, but the visionary leader chose to work with Tata Steels as a normal employee. He once stated in an interview that, during the initial phase of his career, he spent 8 years of his life in training programs in the shop floor of two or three companies. He also added that, though he thought that he was wasting time at that particular phase of his career, those 8 years of training and learning were his best life decision which later acted as an investment. As a prominent industry leader of India, Ratan Tata has always supported continuous learning and believes listening and learning to be the keys to success. In one of his speeches, Ratan Tata has mentioned that, “Just because you got a degree doesn't mean you should stop learning. If you want to be successful in life you should never stop learning".

Trust and Commitment Matters the Most in Business

When Ratan Tata removed Cyrus Mistry from the chairman position in 2016, it shook the corporate world because he was the same person behind putting his trust in Mistry for taking his position. As per many industry stalwarts, the major reason behind Ratan Tata removing Cyrus Mistry was majorly because of the values and commitment of the Tata group.

When the Japanese company NTT Docomo arrived in the Indian market in 2009, they bought 26% stakes from Tata group with the promise that they can leave the alliance whenever they want and they will be refunded as per the current market value of that time. Otherwise, at least half of the investment will be refunded to them. Due to some problems Tata teleservices couldn’t function properly, as a result of which, Docomo decided to leave. During this scenario Cyrus Mistry was the chairman, and using RBI guidelines against Docomo, he not only refused to give the money back but also started legal cases against Docomo.

At that time, Docomo felt really disappointed because they trusted Tata company and only came forward for this business alliance owing to its values and commitment. For Ratan Tata this business deal was unacceptable, which made him remove Cyrus Mistry from the chairman position of the Tata group.

Failure is the Greatest Motivation

When ratan tata made the first Tata Indica car, it didn’t work well in the market and he had to face losses. He unwillingly accepted the advice of other company members and experts and went to America to sell his car division to ford. But at the meeting, he was arrogantly insulted by Bill Ford the owner of the ford company, who said, "When you don’t know anything about making cars, why do you bothered to give it a try? We will be doing a great favour on you by buying this company".

Refusing the deal, Ratan Tata came back to India and started working on Tata Motors and made it a huge success. The tables turned nine years later, and when the ford company started facing losses, they decided to sell their two iconic brands jaguar and land rover. Ratan tata decided to buy those brands for $2.3 billion and Bill Ford said to Ratan Tata, "you are doing a great favour on us by buying these two brands".

Believe in Your Decision

When Ratan Tata took over Tetley Tea for 450 million dollars, he was quite certain about his decision. Though many industry leaders doubted this step of Ratan Tata, he not only chose to ignore those doubts but also worked silently to make Tata Tea the second-largest tea company in the world. This necessarily doesn’t signify that Ratan Tata was never wrong or he always took the right decision, but what matters is his faith in those decisions and his contributions towards them to make them work. The only thing he used to advise others that they should learn from their mistakes and try not to repeat them.

Many people have often wondered that even if the Tata company earns so much, why don’t they have never come across Ratan Tata in the list of the richest man. When Ratan Tata was asked about him not staying in the list of richest men, he swiftly replied that "Mukesh Ambani is a businessman and I am an industrialist".

Although the Reliance earns less in numbers in comparison to TATA, the name of Mukesh Ambani always comes in the list. The reason behind this lies in the faith of Tata group in charity as it gives 65% of its income to charity. Also, the major reason behind Tata coming up with Nano car is to help every person, even if someone from the lower-middle class to enjoy the experience of having a car. Even after getting losses in India, Ratan Tata has not stopped the manufacturing of the Nano Car as he believes in his ideology of contributing something for everyone.

Every Diwali, Tata contributes almost 1000 crores or more to cancer patients. During the covid pandemic, Tata donated 1,500 crores to support the country in its fight against COVID-19. Looking at the severity, Ratan Tata has also said that if the country needs, he will not hesitate to donate his entire property for India.

Leaders must be Innovators

A crisis can be unpredictable and affect all spheres of life. A leader must have the ability of transforming a crisis as an opportunity for growth which requires innovation. After Tanishq was launched in 1995 with a notion of creating a market segment for 18K jewellery bordering on western designs, it faced terrible losses, approximately amounting to Rs 150 crores. After a lot of market research under the leadership of Ratan Tata, Tanishq not only launched 22K traditional Indian designs in to the global market but also initiated Karatmeter to check the purity of the gold it was guaranteeing for. Completely changing the game, this strategy compelled many people to trust the systematic way of evaluating gold, and the business acquired pace quickly.