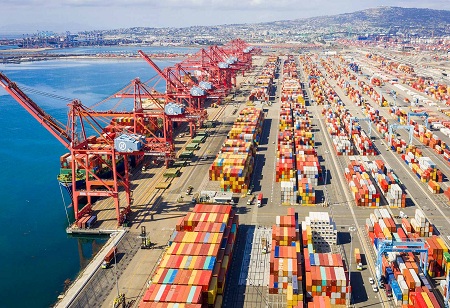 According to S&P Global Market Intelligence's most recent Global Trade Monitor report, the economic slowdown does not appear to be having an impact on India's trade.

According to the survey, India has the most promising prospects for global commerce among the top 10 economies. The top 10 world economies--US, EU27, mainland China, Japan, the UK, India, Brazil, South Korea, Canada, and Russia are responsible for approximately four-fifths of the world GDP and three-quarters of global exports, with most trade carried out within the group.

The report's monthly historical data showed that in the top 10 economies exports are primarily impacted slowing down in the majority of economies within the group.

"The picture is slightly more optimistic for imports, yet the situation is expected to deteriorate in the forthcoming months for both exports and imports, which is reflected in the most recent PMI NExO readouts," the report said.

The consequences of the global economic slowdown are not that apparent in the monthly data for 2022 as in the first three quarters of the year, the dynamics of exports and imports were relatively strong in the top 10 economies.

"This should translate in still positive growth in 2022 from the yearly perspective, yet in 2023 global trade contraction may be expected. GTAS Forecasting expects trade recovery to start in 2024, returning to the long-term stable growth path," it added.

On economic growth, the report said the months ahead will likely bring recessions in Europe, the US, Canada, and parts of Latin America. With moderate growth in Asia Pacific, the Middle East, and Africa, the world economy can avoid a downturn, but growth will be minimal.