Green Hydrogen Might be Key to Decarbonizing India's Industrial Realm 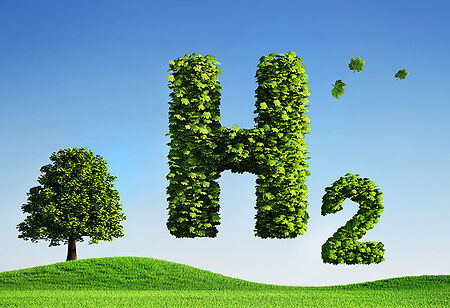 From Japan, South Korea, Energy companies to US President Joe Biden pushing for clean energy, India also joins that enthusiastic cloud in implementing Green Hydrogen to curb carbon dioxide (CO2) or Greenhouse gas emissions. The nation enforces refineries and fertilizer plants to sprinkle some of that good ol’ green hydrogen rather than those regular fossil fuels.

Based on the progress, the nation will soon lay down a gradual rise in the use of green hydrogen under its draft Hydrogen policy.

While that’s set for yielding, the nation has already given its word on using it as transport fuel, with certain buses running on hydrogen blended fuel on a trial basis. On that trial and error basis, Indian Railways welcomed diesel fuel trains to have a go at carrying their operations pumped with this electrolysis based zero-carbon fuel.

At this point, every ounce of effort is being put to the task to achieve 'Net-Zero Emissions'. But regarding Green Hydrogen, currently being the talk of the town, what’s all the fuss about it and what can it do for the environment?

Is Green Hydrogen Better than Batteries?
Created using renewable energy from wind and solar instead of fossil fuels, experts believe that Green Hydrogen is one of those trump cards essential to meeting the ‘Net-Zero Emissions’ of the Paris agreement. Since the economies of countries have certain loopholes that make it hard to eliminate emissions.  Although energy efficiency, renewable power and direct electrification are believed to take down emissions from electricity production including a bit of transportation. But about 15 percent or so of the economy comprising aviation, shipping, long distance trucking and concrete and steel pose a bit of a hassle in decarbonization, as these sectors call for high energy density fuel or intense heat to get the job done. Precisely, Green Hydrogen is that magical brush to brush away those difficult spots.

Unlike batteries that fail to store ample amounts of electricity for long periods of time, hydrogen can be produced from excess renewable energy and stored in big quantities for long periods of time. Hydrogen contains thrice as much energy compared to fossil fuels, therefore a bit is more to qualifying to get it going. It can be used in industry and stored in existing gas pipelines that turn helpful to power those home appliances. When turned into a carrier like ammonia, a zero-carbon fuel for shipping, it can transport renewable energy. It’s exactly as that saying, ‘there’s more to it than meets the eye’ goes. But it’s now more vital to know why India has also hopped onto its bandwagon and what are its plans under its draft hydrogen policy.

India’s Draft Hydrogen Policy to Boost Green Hydrogen Production
It’s exactly as it suggests, the nation has goals of enhancing Green Hydrogen production among sectors as it sees fit, especially around its transportation unit. A great example of this can be seen in certain buses with the support of Indian Railways, already running on Green Hydrogen blended fuel for trails.

This policy expects Green Hydrogen to contribute 10 percent of refiners’ overall hydrogen demand during 2023 and 2024 to 25 percent in five years, considering India’s efforts at raising renewable energy capacity weighing at 92.97 gigawatts currently. The reason for this is to meet about two-fifths of its electricity needs by 2030 under the Paris climate agreement. It currently plans to top-up its renewable energy capacity to 175 GW by 2022 and 450 GW by 2030.

Moreover, the Indian government’s Ministry of New and Renewable Energy (MNRE) has presented three policies, with the most vital one being the ‘National Hydrogen Energy Mission aiming to enhance Green Hydrogen production. The policy also plans for the nation’s efforts to coincide with best global technology practices, policy and regulation.

Meanwhile major government-owned and private entities in the Indian renewable energy space have also formed a set of initiatives and investments around Green Hydrogen. The National Thermal Power Corporation (NTPC), Indian Oil Corporation (IOC), Reliance Industries Limited are among the most notable ones in this space.

To help decarbonize portions of the manufacturing process, IOC has various approved expansion plans that will use power from the grid, ideally green power, rather than building a captive power plant.

In the union territory of Ladakh, NTPC REL and NVVN will collaborate on a green transportation initiative. NTPC REL is also building a separate 1.25 MW solar plant in Leh to make the hydrogen fueling station totally green.

Reliance to Invest $ 10.1 Billion in Green Energy by 2024
Reliance Industries, an Indian conglomerate, plans to invest more than $10 billion in green energy over the next three years in order to reach its goal of becoming carbon-neutral by 2035. Mukesh Ambani, the group's chairman, stated that the business will invest 60 billion rupees ($8 billion) in the construction of a solar module factory, an energy storage battery factory, a fuel cell factory, and an electrolyser facility to produce green hydrogen. He further went on to say that an extra 15 billion rupees ($ 2.1 billion) would be saved for building infrastructure and future technologies in upstream and downstream industries.

The four ‘giga factories’ will be built on the existing complex in Gujarat, according to the company, which controls the world's largest refinery complex in Jamnagar. According to Ambani, it will be among the world's largest such integrated renewable energy manufacturing facilities, with a goal of enabling at least 100GW of solar power capacity by 2030, mostly through tiny installations on corporate and building rooftops. By the end of the decade, India is predicted to have 450 GW of installed capacity.