Power is a critical business requirement for any industry, business entity and with the state distribution companies increasing their tariff between 5 – 10 percent annually, it is imperative that this cost is managed and controlled diligently. Solar PV power while fulfilling the green agenda of Indian Industries can provide significant recurring savings. Persept Solar as part of its consultancy services, engages with its clients in their decision process life cycle for sourcing Solar PV power. Persept Solar engagement covers all aspects encompassing the entire life cycle resulting in predictable power costs over long term and significant recurring savings.

The idea of offering ‘Solar Power as a Service’ with a Pay by Use model utilizing the available rooftop space of industries and commercial establishments was initially conceptualized by Founder Director M Srinivas Ramprasad in August 2011. In April 2012 Srinivas Ramprasad was joined by Co Founder and Director Wg Cdr ( Retd) Rajendra Prasad and the conceptualized idea was incubated as Persept Solar at Indian Institute of Management ( IIM) Bangalore entrepreneurship incubation centre NSRCEL in June 2012.

In 2011 when the idea of Solar Power as a Service was conceptualized, Industries were severely constrained by availability of power from power distribution companies due to demand supply gap resulting in them relying on the very expensive diesel power combined with environmental pollution. While Solar PV was a proven technology internationally, the capital cost of creating any capacity was expensive. The services offered by Persept Solar made the decision process simple for Industries as they did not have to incur capital expenditure in creating the capacity but only pay for the power consumed and offer their rooftop space.

Reliable & Affordable Source of Power
Being a startup, team Persept Solar was constrained initially on multiple fronts such as visibility in the market, customer acquisition and investment / funding. Incubation at IIM B / NSRCEL enabled visibility for their services along with initial customer acceptance, business associates and business partners. Attaining greater heights of success, the company now offers consulting services that includes
Feasibility studies covering policy / regulatory framework, technical and commercial analysis, support clients in selecting the IPP to supply solar

power or EPC companies to construct Solar PV plants, engage with clients as a partner for successful execution and commissioning of power from the selected vendor.

“In addition to our consultancy services, we will continue to focus on two other areas turnkey implementation of Solar PV plants and offer Solar Power as a Service through pay by use model. We have turnkey solar plant installations capability on rooftop with a minimum capacity of 25KWp” mentions Srinivas Ramprasad, Founder Director & CEO, Persept Solar. 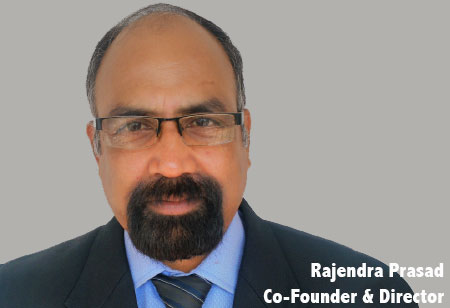 All these years, the company has gained significant insights while commissioning plants as IPP and also on turnkey basis. “When our customers engage us for consultancy services, we provide them with these rare insights that help them make better informed decisions on sourcing solar power. We have networked with key individuals associated with various DISCOM's and Transmission companies spread across the country which is critical for interpreting the nuances of policy/regulatory framework associated with the respective states,” he says.

In the coming years, Persept Solar intends to add new emerging technology evaluation with specific focus on energy storage to its consulting portfolio. “We predict that energy storage solutions and services will be next big opportunity for Solar Energy sector,” he concludes.