What Can Bull and Bear Mean to Your Business 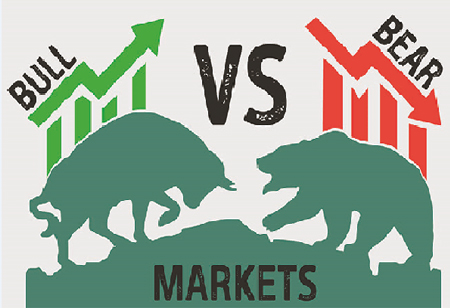 The terms “Bull” and “Bear” are common in the investing world. These terms signify market conditions. As the path covered by any market affects a business’s reign, familiarity with the terms is highly essential to learn about the functionality of “Bull” and “Bear” in the business coordinates.

Each has its own definition. The market which is economically developed and witness growth with time is a Bull market and the market where the economic conditions are traumatized due to declining stock values is known as a Bear market. Stock market, in general, has obstacle-free return for the investors; without hesitation it is duly conclusive that the Bull market population outbalances the Bear market population. This is why investors often step back from investing in a bear market. A major section of the investors face loss in equity with share prices dropping like a sudden avalanche.

On the contrary, the Bull market marks the gradual upsurge in price that is why businesses do not find any trouble in spending in the Bull market. A country resting its economy on the Bull market achieves a stronger economy and higher employment rate when compared to any other.

A market cycle is measured from the highest point to lowest. When a stock index extends towards the Bear territory during which the closing price falls by 20 percent as compared to its most significant high, it is known as watch for 20 percent. On reverse, the start of the new Bull market is notified when the closing price from its low attains a 20 percent profit. The present Bull market has perceived a 330 percent S&P rise in the past 10 years. Though it resides at the second position as the 90s Bull market gave 417 percent in return.

Factors to Consider Before Investing

A country whose GDP is high has a Bull market and a Bear market is full of loss of jobs and economic insecurities. It is wise to judge the local market before investing with dreams of getting high returns.