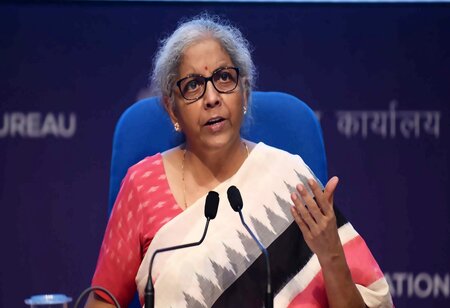 Finance Minister Nirmala Sitharaman has said on Tuesday that the country's trade pacts with the UAE and Australia will chart the way for economic growth.

Speaking at the stakeholders' outreach programme on India-UAE CEPA and India-Australia ECTA here, Sitharaman said awareness events about these pacts are happening across the country.

She also said the Director General of Foreign Trade (DGFT) has been asked to translate the details of the trade pacts in Tamil and share them with the media and stakeholders.

Tamil Nadu has a long-time connection with the leather sector, and the industry has achieved modernisation, Sitharaman said, as she went on to add that Tamil Nadu has been a frontrunner in trade for a long time.

She urged entrepreneurs to know the features of these agreements and make best use of them.

"If you want any support in connection with the agreements, feel free to convey it to us," she added.

"The industry should equip itself to cater to the changing tastes and preferences of consumers post Covid. Access the available markets that are part of the agreements," she said.

According to Sitharaman, when Prime Minister Narendra Modi visited the UAE some years back, the Royal family promised $75 billion worth investments in India.

Sitharaman added that a formal agreement has also been signed, and entrepreneurs should scale up their businesses to get share from the investments.

"We are now dependent on one country for APIs (active pharmaceutical ingredients). So enough investments need to be made after much thought. I request the state government to invite raw material makers to invest here. We should not depend on others for our raw materials. Backward and forward industries should be supported by the governments," she said.

On the trade pact with Australia, Sitharaman said it is for the well-being of the Indo-Pacific economy.

While there are many hurdles because of the Russia-Ukraine war, there are also opportunities since their exports are hit, she said.

Speaking at the event, Union Minister of State for Commerce and Industry, Anupriya Patel, said all efforts are being made to reach out to the stakeholders all over the country to explain the details of the trade agreements.

"The India-UAE trade agreement was concluded in record time. India is the second largest trading partner of the UAE. Several benefits will flow out of the comprehensive agreement between the two countries. There is huge scope and there are so many employment opportunities to be created. Bilateral trade will double in the next five years," Patel said.

"The India-Australia agreement is a clear signal to the other developed economies to partner with India," she added.

Union Minister of State for Fisheries, Animal Husbandry & Dairying, L.A Murugan, congratulated the Department of Commerce and Industry for organising the awareness event in Chennai.

"We are making huge exports in the marine sector. For the first time in history, Rs 20,000 crore was announced for fisheries under the Pradhan Mantri Matsya Sampada Yojana (PMMSY) by Nirmala Sitharaman," he said.