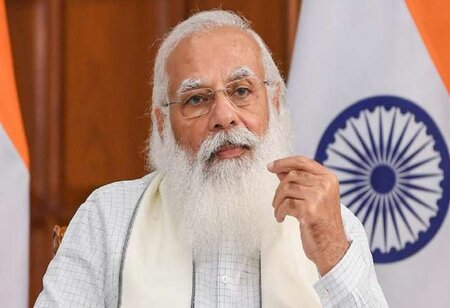 Prime Minister Narendra Modi will launch the Pradhan Mantri Aatmanirbhar Swasth Bharat Yojana (PMASBY) in Varanasi today. The Prime Minister will also visit Uttar Pradesh's Siddharthnagar to inaugurate nine medical colleges in the state. This would be his second visit to the poll-bound state in a week.

After inaugurating the colleges in Siddharthnagar, PM Modi will be heading to his Lok Sabha constituency - Varanasi - to launch PMASBY, which is aimed at strengthening health infrastructure in urban as well as rural areas. While in Varanasi, PM Modi will also inaugurate various development projects worth more than Rs 5,200 crore, explained the Prime Minister's Office (PMO) in an official statement. UP Chief Minister Yogi Adityanath will also be present.

Healthcare professionals and staff from functional health and wellness centres at the panchayat and block level, sub-district and district hospitals and the Government Medical College of Varanasi will be virtually participating in the launch of PMASBY.

The nine medical colleges to be inaugurated by PM Modi are situated in Siddharthnagar, Etah, Hardoi, Pratapgarh, Fatehpur, Deoria, Ghazipur, Mirzapur and Jaunpur.

All you need to know about the Pradhan Mantri Aatmnirbhar Swasth Bharat Yojana:

1. The objective of PMASBY is to fill critical gaps in public health infrastructure, especially in critical care facilities and primary care, in both urban and rural areas.

2. The scheme will operate in addition to the National Health Mission.

3. The government scheme will provide support for 17,788 rural health and wellness centres in 10 high focus states.

4.Further, 11,024 urban health and wellness centres will be established in all the states under the scheme.

5. Critical care services will be available in all the districts of the country with more than 5 lakh population, through exclusive critical care hospital blocks, while the remaining districts will be covered through referral services.

6. People will have access to a full range of diagnostic services in the public healthcare system through a network of laboratories across the country, explained the PMO.

8. PMASBY targets to build an IT-enabled disease surveillance system by developing a network of surveillance laboratories at block, district, regional and national levels in metropolitan areas.

10. The Narendra Modi-led government had announced the scheme in Budget 2021-22 on February 1, 2021. The scheme was approved by the Union Cabinet in September.