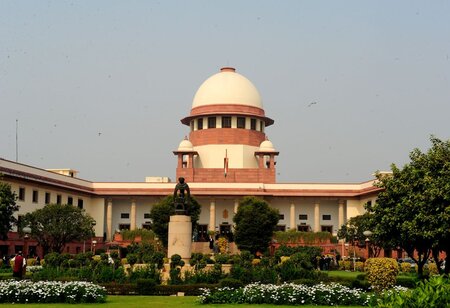 The Supreme Court on Tuesday ordered that Rs 9,122 crore will be disbursed within three weeks to the unitholders of Franklin Templeton’s six mutual fund schemes which are proposed to be wound up. A bench of Justices S A Nazeer and Sanjiv Khanna said that the disbursal of the said money would be done in proportion to unitholders’ interest in the assets. In the proceedings conducted through video conferencing, the bench entrusted the State Bank of India (SBI) Mutual Fund to disburse the money as all the counsels gave consent to the court’s order.

The bench granted liberty to the litigating parties to approach the court in case of any difficulty in the disbursal of money to the unitholders. The court also gave the parties liberty to move applications in case of any difficulty arising out of the process. The lawyer, representing Franklin Templeton Trusts Services Limited, told the bench that the company would render cooperation with SBI Mutual Fund. The bench on January 25 had said it would first deal with the issues related to objection to the e-voting process for winding up of the six mutual fund schemes and distribution of money to the unitholders. Prior to this, the apex court had granted three days for filing of objections to the e-voting on winding up of six mutual fund schemes of the company. It was also told by the counsel for Franklin Templeton that an order be passed for allowing distribution of money to the unitholders. Earlier, the apex court had asked the Securities and Exchange Board of India (Sebi) to appoint an observer for overseeing the e-voting process.

The voting with regard to winding up Franklin Templeton’s six mutual fund schemes had taken place in the last week of December and it has been approved by the majority of unitholders. The apex court had said that its December 3 last year order by which it had stayed the redemption of payment to unit holders would continue till further order. “SEBI shall appoint an observer regarding the e-voting of unit holders which is scheduled between December 26 to December 29, 2020. The result of the e-voting would not be announced and would be produced before us in a sealed cover along with the report of the observer appointed by the SEBI”, the bench had said.

Till November 27, 2020 the six schemes received total cash flows of Rs 11,576 crore from maturities, pre-payments and coupon payments since April 24 last year. The cash available stands at Rs 7,226 crore as of November 27, 2020 for the four cash positive schemes, subject to fund running expenses

It had said that SEBI would also file a copy of the final Forensic Audit Report before the court in a sealed cover. The apex court is hearing an appeal filed by Franklin Templeton against the High Court’s order which stopped the fund house from winding up its debt fund schemes without prior consent of the investors. On December 7, 2020, Franklin Templeton Mutual Fund had said it has sought consent of the unit-holders for the orderly winding up of the six fixed income schemes.

On December 3 last year, the apex court had asked Franklin Templeton Mutual Fund to initiate steps within one week for calling a meeting of unit-holders to seek their consent for closure of six mutual fund schemes. ? The bench had observed that the issue is big and people wanted a refund. The Karnataka High Court had earlier said that decision of Franklin Templeton Trustee Services Private Limited to wind up six schemes cannot be implemented unless the consent of the unit holders is obtained.