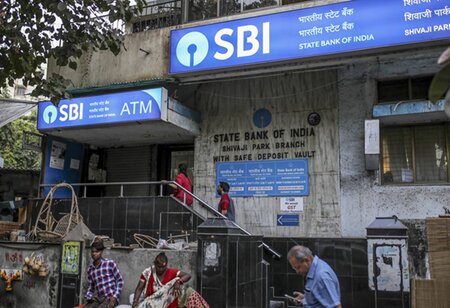 Hit by higher provisions and slower net interest income growth, the State Bank of India, which is the country’s largest lender, on Thursday reported a 6.93 percent year-on-year decline in standalone profit at Rs 5,196.22 crore for the quarter which ended in December 2020 from Rs 5,583.36 in the same period a year ago.

Net interest income, the difference between interest earned and interest expended, grew by 3.7 per cent year-on-year to Rs 28,819.94 crore in Q3 of FY21. NII in Q3 of last year was higher due to the recovery in the Essar Steel account. SBI Chairman Dinesh Khara said total stressed assets (slippages added with restructured accounts) will remain below Rs 60,000 crore this year as against Rs 41,000 crore as of December. The bank aims to control its credit costs this year, well below the 2 per cent guidance it had given previously, he said. The bank’s gross non-performing assets (NPA) as a percentage of gross advances at 4.77 per cent in December 2020 declined 51 bps sequentially and the net NPA at 1.23 per cent fell 36 bps on quarter on quarter basis. All segments of loan books reported decline in NPA with bad loans from corporate book down 35 bps and retail 62 bps. On proforma basis without reference to the Supreme Court interim order, the gross NPA would have been at 5.44 per cent and net NPA at 1.81 per cent in Q3FY21.

The Supreme Court in September last year had directed that “the accounts which were not declared as NPA till August 2020 shall not be declared as NPA till further orders”. Accordingly, the bank has not declared any domestic loan account as NPA which was standard as on August 2020. Khara said the bank had seen some recoveries in sectors like textiles, aviation and airports, hotels and tourism. “We are confident that once we reach near-normal, we should start seeing demand from corporate borrowers,” he said.

According to SBI, provisions and contingencies increased significantly by 42.6 per cent year-on-year to Rs 10,342.39 crore in Q3 of FY21. It had proactively made an additional provision of Rs 6,247 crore as of December 2020 towards the possible impact of Covid pandemic. “The bank’s management is not expecting any significant impact on the bank’s liquidity or profitability,” it said. “Credit growth stood at 6.73 per cent, mainly driven by retail (personal) advances (15.47 per cent), SME (5.62 per cent) and corporate advances (2.23 per cent). Including the YoY growth in corporate bonds and commercial papers of Rs 44,161 crore, the loan book has grown by 8.16 per cent,” SBI said.

Total deposits grew at 13.64 per cent on a year-on-year basis, out of which current account deposit grew by 11.33 per cent, while saving bank deposits rose by 15.99 per cent, the bank said. The net interest margin remained stable at 3.12 per cent sequentially, but contracted 21 bps year-on-year. The fresh slippages were sharply lower at Rs 237 crore for the quarter ended December 2020, compared with Rs 3,085 crore in previous quarter, but proforma slippages for Q3FY21 were at Rs 2,073 crore and proforma slippages for 9 months at Rs 16,461 crore.