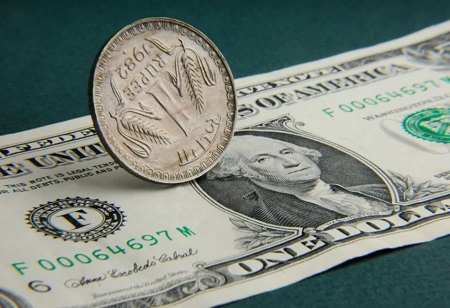 "Market participants vary as the central bank's dollar supply at one end limits the downside while the broad-based strength in the dollar pushes the rupee lower. However, one should always keep in mind The trend is your friend -- and any dip in USDINR will be an opportunity to buy as long as it trades above 79 while on the higher side one can expect a rally above 80.10," said Dilip Parmar, Research Analyst, HDFC Securities.

Dollar index, which gauges the the strength of greenback against the basket of six major currencies were at 109.915.

Brent crude oil prices were at $96.21 a barrel by the closing of Indian market hours.

SunPharma, ITC, NTPC, Reliance Industries, Larsen and Toubro were major gainers on the Sensex on Monday. BSE LargeCap ended up 0.59 per cent, while BSE SmallCap and MidCap closed 0.89 per cent and 0.46 per cent higher.

"80.00 has been acting as a very strong barrier any close above 80.00 shall provide strong covering towards 80.25/30 levels," said Jateen Trivedi, VP Research Analyst at LKP Securities.