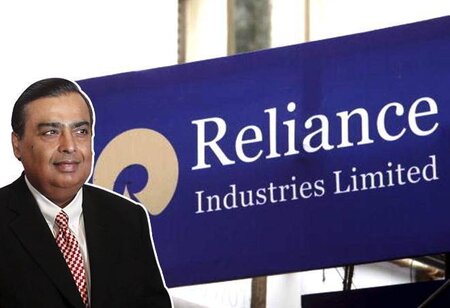 Mukesh Ambani-led Reliance Industries Ltd's (RIL) became the first Indian listed company to touch the Rs 19-trillion market capitalisation-mark after its shares scaled a record high. The stock hit a new high of Rs 2,827.10, up 2 per cent on the BSE in Wednesday's intra-day trade in an otherwise weak market.

"Reliance industries is firing on all cylinders because its petchem business is doing extremely well on the back of a surge in Oil and Gas prices where Singapore gross refining margin (GRM) is at an all-time high. Its telecom business is unaffected by geopolitical tension and inflation whereas it is exploring synergies in its retail business. It is continuously expanding its path in the renewable energy business that opening more opportunities for the company," said Santosh Meena, Head of Research, Swastika Investmart.

RIL is one of India's biggest conglomerates with a presence in refining or marketing petrochemicals (O2C), oil and gas exploration, retail, digital services and media, making it a well-diversified business entity. In April-December period (9MFY22), O2C and oil and gas contributed 50 per cent to the EBITDA level whereas retail, digital and others contributed 10 per cent, 34 per cent and 6 per cent, respectively.

RIL and Abu Dhabi Chemicals Derivatives Company RSC (TA’ZIZ) on Tuesday signed a shareholder agreement for a chemical project in Ruwais, Abu Dhabi. The development acquires significance as it will focus on chlor-alkali, ethylene dichloride (EDC) and polyvinyl chloride (PVC) production, which is used in a wide range of industrial applications.

This is expected to unlock new revenue streams for RIL as well as the Abu Dhabi National Oil Company (ADNOC) and ADQ, an Abu Dhabi-based investment and holding company, who are strategic partners in TA’ZIZ, a joint venture company.

With today's fresh life-time high of Rs 2,827 per share, the stock of India's biggest company by market-cap is seen testing its yearly Fibonacci (R2) resistance at Rs 2,828. A decisive close above it can push the stock towards Rs 2,935, indicates the yearly Fibonnaci charts. The near-term support is placed at Rs 2,767.

That apart, price-to-moving average action and trends on momentum oscillators such as 14-day Relative Strength Index (RSI), MACD, and Directional Index (DI) are supportive of the positive trend. Only the slow stochastic indicator is indicating slowdown in the momentum.