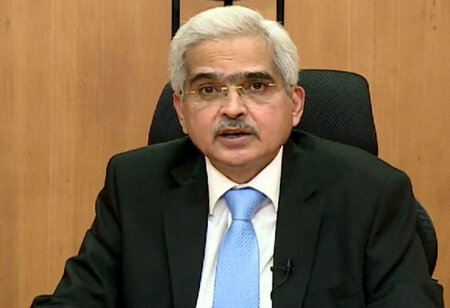 The Reserve Bank of India (RBI) announced support steps to cushion the economic impact of the pandemic on Wednesday, including giving individual and small borrowers more time to repay debt and allowing banks to offer priority loans to vaccine manufacturers, hospitals, and COVID-related health infrastructure.

Moratorium eligibility
The moratorium of up to two years will be available to individuals and small and medium enterprises that did not restructure their loans in 2020 and were classified as standard accounts till March 2021, RBI Governor Shaktikanta Das in an unscheduled address. This facility will be available to borrowers with a total exposure of Rs 25 crore.

RBI will give Rs 50,000 crore of liquidity support to banks for providing fresh lending "to a wide range of entities including vaccine manufacturers; importers/suppliers of vaccines and priority medical devices; hospitals/dispensaries; pathology labs; manufactures and suppliers of oxygen and ventilators; importers of vaccines and COVID related drugs; logistics firms and also patients for treatment," he said.

These loans of up to 3 years tenor will be obtainable at repo rate and will be available till March 31, 2022. He also announced a calendar for bond-buying.

Just as the economy appeared to be inching back to normalcy, India was hit by a second wave of infections in early April, prompting states and cities to restrict public movements and impose lockdowns, which have hit some businesses hard. India added 3,82,315 virus cases over the last 24 hours to reach a total of 2.06 crore, while death rose by a record 3,780 to 226,188, health ministry data showed.

Bankers asked RBI for three-month moratorium
RBI has been meeting with bankers and shadow lenders (NBFCs) in recent weeks to discuss the economic situation, possible stress to balance sheets and credit flowin the system. Bankers had reportedly asked the RBI for a three-month moratorium, particularly for retail and small borrowers, as the world's fastest rising pandemic curve began hurting businesses and jobs, with potential to inflate bad loans (defaults).

"The devastating speed with which the virus affects different regions of the country has to be matched by swift-footed and wide-ranging actions that are calibrated, sequenced and well-timed so as reach out to various sections of society and business, right down to the smallest and the most vulnerable," Das said.

RBI will buy Rs 35,000 crore of bonds under ''Government Securities Acquisition Programme'' (G-SAP) -- India's version of quantitative easing -- on May 20. It has also allowed banks to dip into their floating provisions to set aside money for bad loans.

"As the financial year 2020-21 (April 2020 to March 2021) - the year of the pandemic - was drawing to a close, the Indian economy was advantageously poised, relative to peers. India was at the foothills of a strong recovery, having regained positive growth, but more importantly, having flattened the infection curve. In a few weeks since then, the situation has altered drastically," he said.

While a battle is mounted to deal with the unprecedented crisis, shoring up livelihoods and restoring normalcy in access to workplaces, education and incomes has become an imperative, he said.

"As in the recent past, the RBI will continue to monitor the emerging situation and deploy all resources and instruments at its command in the service of the nation, especially for our citizens, business entities and institutions beleaguered by the second wave."

On the economic outlook, the governor said the global economy is exhibiting incipient signs of recovery but activity remains uneven across countries and sectors.

In India, the record foodgrains production and buffer stocks in 2020-21 provide food security and support to other sectors of the economy in the form of rural demand, employment and agricultural inputs and supplies, including for exports. But aggregate demand conditions, particularly in contact-intensive services, are likely to see a temporary dip.

A normal south-west monsoon, as forecast by the IMD should help to contain food price pressures, especially in cereals and pulses, he said adding the inflation trajectory over the rest of the year will be shaped by the COVID-19 infections and the impact of localised containment measures on supply chains and logistics.

Das said under the Rs 50,000 crore term liquidity facility, banks are expected to create a COVID loan book under the scheme.

RBI will also conduct special three-year long-term repo operations (SLTRO) of Rs 10,000 crore at repo rate for small finance banks (SFBs) which will be deployed for fresh lending of up to Rs 10 lakh per borrower. This facility will be available till October 31, 2021.

Das also announced rationalisation of certain components of the extant KYC norms including extending the scope of video KYC for new categories of customers. Other measures included relaxation in overdraft facility for state governments.

"The second wave, though debilitating, is not unsurmountable," Das said. "At the RBI, we stand in battle readiness to ensure that financial conditions remain congenial and markets continue to work efficiently. We will work in close coordination with the government to ameliorate the extreme travails that our citizens are undergoing in this hour of distress."