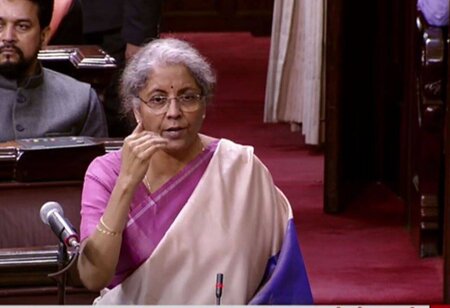 Rajya Sabha on Thursday passed the Insurance (Amendment) Bill, 2021 that seeks to raise the FDI in insurance sector to 74 per cent from the current 49 per cent, despite opposition push to refer the Bill to a standing committee.

“The FDI policy is brought in only to supplement domestic capital. This will only supplement what is available in the country because what is now available is not sufficient,” Finance Minister Nirmala Sitharaman told the House.

Responding to the opposition’s criticism against the amendment, Sitharaman said the law has ‘enough safeguards’ built in.

“Under the new structure, the majority of directors on the board and key management persons would have to be resident Indians, which will make them accountable under the Indian law. At least half of directors are to be independent directors which also ensures accountability,” she said.

On the criticism that the move might dilute reservation in state insurance players, the minister said the Narendra Modi government is committed to the protection of the Scheduled Castes, Scheduled Tribes and Backward Classes.

“All the places connected with Dr BR Ambedkar have been protected by the Modi government. This shows that the government is committed to the SC community and that the reservation policy will not be changed,” she said.

During the discussion earlier, Leader of Opposition Mallikarjun Kharge said the Bill will put people in trouble. The Insurance Act 1938 is being amended for the third time.

He said the Act was first amended during Atal Bihari Vajpayee’s tenure when 26 per cent FDI was allowed in the insurance sector. In 2015, the law was amended further to allow 49 per cent FDI and now the amendment is for allowing 74 per cent. “I want the Bill to be scrutinised to address the gaps and it should be referred to a standing committee,” he said.

NCP MP Praful Patel said the government should discuss the issue of substantial ownership and effective control by foreign investors before passing the Bill. “For common man, insurance means the LIC. From the point of view of LIC, we know that we have succeeded in reaching the last mile. Someone who does not have the buying power and cannot purchase insurance is a different issue. We also brought amendments. However, in this Bill, we have to brainstorm and study the concerns on the substantial ownership and effective control,” he said.

CPI (M) MP Jharna Das Baidya also raised the issue of ownership, saying it should remain with Indian companies and that the government 'should rethink' about the specific clause on foreign control.

Samajwadi Party MP Vishambar Prasad Nishad questioned the Finance Minister on the issue of bankruptcy. “Iif a foreign [entity] is given ownership and later declares the company as bankrupt, how will the Indian investors recover their money,” Nishad asked.

Nishad and RJD MP Manoj K Jha asked if reservation of the backward communities will be diluted with the change in ownership. “When you open this up, would you be able to ensure constitutional provisions with regard to reservation? I am worried. What will happen to SC/ST and OBCs reservation? Are you going to negotiate with the companies which have 74 per cent ownership,” Jha said.

Shiv Sena MP Anil Desai and DMK MP Tiruchi Siva questioned the rationale behind raising the FDI limit, even as the 49 per cent target has not been achieved in the past five years. “So there is no justification to increase the limit,” Siva said.