PLI projects Infrastructural investments to drive growth in the next fiscal: states Report 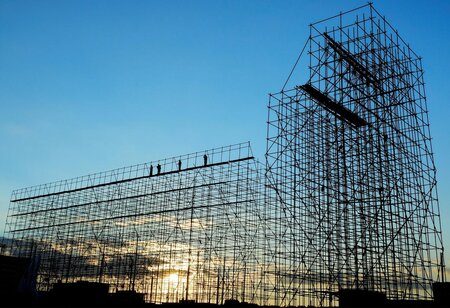 Projecting next year's growth is set to be a story of two halves, with the low base-effect lifting the growth engine in the first half and a broad-based recovery in the second half, a report on Tuesday said that the higher infrastructure investments and PLI projects will drive investments and thus the GDP.

Like others, Crisil also expects growth to rebound to 11 per cent in the financial year 2021-22, after "an estimated 8 per cent contraction" this fiscal. The agency sees four positive drivers converging next fiscal -- people learning to live with the new normal after the pandemic, flattening of the coronavirus infection curve, more vaccinations, and investment-focused government spending.

But, the pace of growth will be different in the first and second halves as was in the outgoing year, with the first half benefitting optically from the low-base effect, second half seeing a more broad-based pick-up in economic activity, owing to rising commodity prices, large-scale vaccination and a likely stronger global growth, she said.

According to Crisil analysis, the potential incremental revenue generation from the PLI scheme is ₹35-40 lakh crore over the next five years across 14 covered sectors

Expecting the dynamics of domestic demand and trade to continue to be unfavourable for small businesses, he called for continued policy support for them and for the urban poor, who have borne the brunt of the pandemic.

Meanwhile, corporate revenue growth has surprised with a V-shaped recovery in the first nine months of this fiscal by cresting three tailwinds — resilience in software and pharam exports, the commodity upcycle, and price hikes offsetting volume declines in automobiles.

Accordingly, the agency pencils in a 15-16 per cent revenue growth led by volume recovery across sectors and higher public investments, especially in roads, railways, and urban infrastructure.

Shorn of the optical base effect, revenue will be only 8-9 per cent higher in 2021-22 than in 2018-19. Operating profit margin, which touched a decadal high this fiscal, should sustain despite some cost pressure, he said.

Given this, the medium-term growth prospects hinge critically on revival of the investment cycle, something that has been missing for so many years now.

Next fiscal, many pieces can fall into place leading to 20-25 per cent overall growth in investments to ₹14.6 lakh crore. The push by the Centre and the states on roads, railways and urban transport, will drive up overall infrastructure investments 17-20 per cent, said its Chief Operating Officer Amish Mehta.

Expecting a 45-55 per cent spike in corporate capex next fiscal, he says this will be driven by large companies in core industrial segments that have gained market share and are operating at higher-than-industry-average utilisation rates, pushing pedal on capex after staying away last fiscal; and secondly time-bound PLI-driven projects.

Among core industrial sectors, cement and metals are expected to see healthy investments; while for others, a meaningful recovery will be at least two years away. According to Crisil analysis, the potential incremental revenue generation from the PLI scheme is ₹35-40 lakh crore over the next five years across 14 covered sectors.