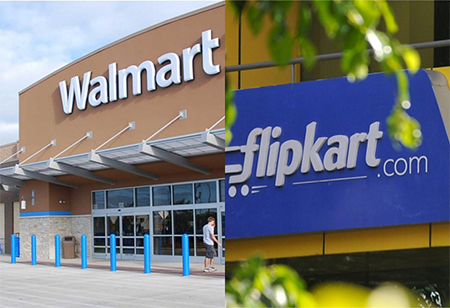 As much as USD 2.1 billion worth of M&A (merger and acquisition) transactions were inked in 2017 in the booming Indian e-commerce industry, which may soon witness its largest-ever deal - the proposed Flipkart-Walmart nuptial.

According to data from Grant Thornton, 21 deals worth USD 2,112 million were seen in 2017 with participation from players like Paytm and Flipkart.

This, however, was lower compared to 2016 which saw deals worth USD 2,224 million (18 transactions) being inked, as per the global audit and advisory firm.  In the January-April 2018 period, six transactions worth USD 226 million were seen, according to the data.

If the Walmart-Flipkart deal indeed goes through, it would be the largest so far in the Indian e-tailing market that is forecast to grow to USD 200 billion by 2026 (Morgan Stanley estimate).  "The Indian e-commerce market is here to stay and grow. The frequency of purchases will increase," Vidhya Shankar, Executive Director, Grant Thornton India told PTI.

On the planned Walmart-Flipkart deal that has already set the e-tailing space on fire. Shankar said the US-retail giant, flush with cash reserves, has a record of entering into areas and markets through acquisitions.  He cited the example of Walmart's 2016 acquisition of e-commerce start up Jet.com to fight Amazon, as a case in point. "India is a long-term play and it is therefore important to get a foothold in the online segment," Shankar noted.

According to sources, Walmart will pump in about USD 15 billion along with Google's parent Alphabet to pick up majority stake in the company, valuing the Indian e-tailer at a whopping USD 20 billion.  While the US retail giant has been in discussions with Flipkart for months now, the deal is likely to be announced in the coming days.

Such a partnership will not only help the Bentonville-headquartered company strengthen its position in the Indian market but also take on global rival Amazon more aggressively.
According to Greyhound Research, Walmart is expected to continue research, Walmart is expected to continue operating its existing Cash & Carry business in India separately and not merge it with the consumer-facing e-commerce business of Flipkart.

"We expect Walmart to be on this journey with Flipkart (if the deal does go through) for the long haul and the one where both parties join hands to bring respective expertise. To give context - Walmart has been sourcing directly from farmers; has great depth in supply chain management warehousing operations - solid pluses for Flipkart," Greyhound Research Chief Analyst and CEO, Sanchit Vir Gogia said.

Market watchers say the decision paves way for Walmart to buy stake from a single entity rather than multiple parties. Flipkart had undertaken a similar move earlier this year, following the closing of its Softbank-Microsoft-Ebay deal.

The deal is also being watched closely as it will set the tone for consolidation in the sector in many ways. E-commerce is a capital-intensive play and companies like Flipkart and Amazon have pumped in billions of dollars towards marketing and setting up infrastructures like warehouses and logistics chains.

Last year, Flipkart was engaged in discussions with Snapdeal for a possible merger but the talks fell through after smaller rival decided on charting its own independent path.